This is a complicated story, so pay attention.

Like most electronic equipment in Crapistan, my laptop was mortally wounded by power surges.  It needed a new motherboard. Because of the lack of qualified computer guys and limited supply of motherboards in Kyiv, I took it to the US to get it repaired while I was home.

After a diligent craigslist search, I found a computer guy in DC who could help. Since new motherboards are hard to find and expensive and I didn't want to buy a new laptop, he said he would try to find a used one on EBay.

He found a laptop identical to mine with a broken monitor. He put my monitor and hard drive in it and shazam! Mostly fixed for $250. He would have charged more, but the power connector still needed to be soldered and he couldn't do that. I told him I would have our office computer guy take care of it in Kyiv. Ukrainians can solder anything.

Now, I work with a crowd of clowns. If they told me the sky was blue, I would look outside to verify. So when they told me Bogdan the computer guy opened my computer to solder the power connection and found a teeming mass of cockroaches living inside, I said, "bring me the can of Raid and their corpses, as well as dated, unphotoshopped evidence." 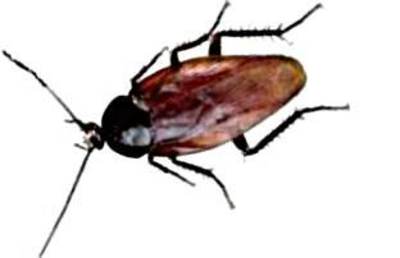 *not the actual cockroach

This raised some troubling questions. Wouldn't importing a laptop full of cockroaches from America to Ukraine violate of all kinds of agricultural regulations? How much did my colleagues pay Bogdan the computer guy to go along with the ruse, even going so far as running to the online translator to look up the English word for what he saw in my computer? Isn't that completely disgusting?

I think they overplayed their hand. One or two cockroaches, while still disgusting, is more plausible and seems like a reasonable cost of doing business with Craigslist computer guys and EBay.

This story is still developing. While it is not at all clear how many cockroaches I carried back to Ukraine in my EBay laptop or how they got there, everyone does agree it was more than one. If I ever get the promised photos, I'll certainly share them and we can put this matter to rest.

The Producer agreed to buy me a new laptop too. (For other stories about my experiences with vermin, check out Rat Master.)

That is pretty funny. My mom took her car in to get the oil changed and when they checked her air cleaner it was full of dog food. I guess the mice were a little pissed when they found out their stash was gone. I am afraid to look, but I suspect that we have a gutter full of peanuts due to a blue jay with ocd

So there really were cockroaches in your laptop? That's scary since those things can survive and thrive anywhere. I killed a huge one last week in Georgia (USA).

Don't worry honey, it wasn't the one I had at your house. I don't blame you...