Way back in the late '90s --- or maybe it was the early oughts; the details of this story are admittedly hazy -- the Producer made a commitment.

This was not the widely-ignored "quit smoking before we get married" commitment of 1994. Nor was it the "you're going to buy me a horse someday" commitment (but for quick action on my part, I almost had a half-Arab courtesy of some guy in a L.A. bar called "the Casting Couch" back when we ate ramen for dinner every night and walked a lot of places because we had no money for gas).

Under circumstances that are now obscure*, probably because of an alcoholic haze hanging over the event, The Producer agreed to procure a Gram Parsons impersonator, wearing a genuine Nudie Suit, to perform at my 40th birthday. 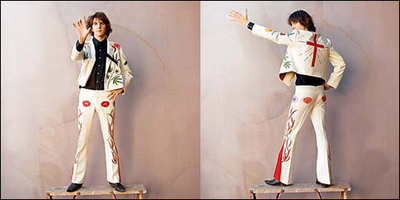 Because I believe in accountability, and the Presidential election, which falls AFTER my 40th birthday, has already started, it's time to increase the sense of urgency around this issue. This agreement was made MINIMUM eight years ago. My 40th birthday is approximately 17 months away and the Producer is no closer to making this happen than he was when he agreed to it.

*Do any readers out there recall those circumstances?

Posted at 04:47 PM in art and culture, Producer | Permalink

Write a book and hire an army of FSU Gram Parsons impersonators with the proceeds.

In your book, you can have one of those photo centerfolds with the scraggly-ass Santa in Baku photo in the middle. If I was in Borders, I would buy the book on the sole merits of that particular photo. Maybe it should be on the cover?

Putting together the book wouldn't be that hard. I picture it as a Tim O'Brian-like compilation of short travel/war stories coming together to make a short novel. You could borrow liberally from your own blog, fill in the details and throw in a few pictures. It would be easier than learning how to say "contaminated peanut butter" in Turkish.

Since you say you have nothing better to do, have you thought of selling your creative wit to those of us who may not have such wit but do have know-how? I need a number of things which I think you could dream up which I cannot seem to do for myself. Email me if this could be your calling, we can talk trash and come to an agreement. Thanks!

Carptetblogger wrote: " My 40th birthday is approximately 17 months away and the Producer is no closer to making this happen than he was when he agreed to it."

Now CB. I can go along with 'top lock abuse' - a whole new category of domestic violence. This is indeed a pioneering blog.

But failure to find a GP impersonator? How many people these days look like Gram, let alone can sing and play guitar while completely stoned. According to Phil Kauffman's 'Road Mangler' book, even Gram couldn't do it.

I suggest a reprieve for the Producer. He should hire the Desert Rose Band for your birthday. I'm sure Chris Hillman still has his old Nudie suit. And since he's clean these days, you won't have to put ice cubes up his butt at the end of the set.

Yah, I was there. It was in that little fish place on, what's it called, you go up from Independence via the fish market, then turn right, and on the right hand side just before the first corner - anyway, it was last time I was there, right after I shaved, and about 4 beers and a half a bottle of the rak. At least, this was when I first heard about it. And then I think I volunteered to be Gram, which means no haircuts between now and then, assuming a crew-cut Gram isn't what you want, which how could it be. I can make it to Stamboul, of course - that where you gonna be?

Anyway. I will have one of the silk suits converted - I need a better picture, though, and where the hell do I get that sweet embroidery? Thank God for combat zones, or I wouldn't have the slave labor to get 'er done.