The Producer and I were discussing today how intense the prayer calls seem to be in Istanbul, more so than in any other Muslim city we've been in, except maybe Cairo. Sitting outside on our balcony at prayer time sounds like sitting in a football stadium. The calls sweeping across the city form almost a visible wave of sound and are louder than traffic or the boat horns or shrieking cats. 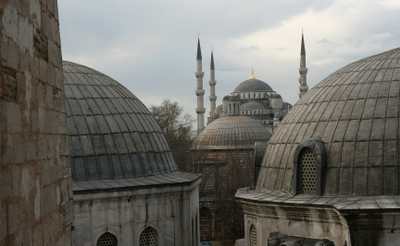 We heard our first prayer call after arriving to Istanbul in the middle of the night from Warsaw, back in 1991. We were staying in a ghetto backpacker hostel that must have been right under the Hagia Sofia. The hostel was so ghetto that the mattresses placed in the hallway prevented us from opening our door to go pee. The Producer, in a state of crisis, peed out the window. When the recorded call was belted out at 5:30 am, I still remember the adrenaline that shot me out of bed.

Now, while sitting at my desk, I can measure the progress of my day by the prayer calls. I'd better be showered and working by the midday call. I'd better have something written other than bitchy emails to entities with whom I am involved in consumer disputes by the one around three-ish. The 5:30ish one means it's almost time to feed the carpetdogs (have they figured this out yet?) and the last one means that the carpetdogs should be finishing their walk.

Astute readers will note that there are five prayer calls per day, but I only mention four. Get to know me. The one at 5:30 am has no impact on my day whatsoever.

Want to know what time to pray where you live? Try this, but it's not as simple as you'd think. Islam is theologically complicated.

Maybe it's the sheer number of mosques, though lots of cities have mosques on every corner and at the end of every alley like Istanbul. Maybe it's the city's geography, riven as it is by the Bosporus and the Golden Horn and lumpen with hills and valleys. The Mosque at one start of my street is called either "the hollow mosque" or "the mosque in the hollow." I predict it's the latter. I haven't been in it, but geographically, it makes sense.

Oh, I've grown so accustomed to the athan, so I hardly notice it anymore, even though one minaret is less than 50 metres from our flat, but who am I to judge... Love your reflection on how the calls set the pace of the day. What is worse though is a really bad muezzin. That simply kills me! The worst example I've experienced was during a two-week stay in Assos this summer. It actually made one's morning coffee turn sour... The best example in Turkey so far has been Urfa. A sidetrack concerning Urfa: Have you ever heard of ichtyolatry? It is still practised in Turkey, besides obscure places in Southeast Asia...

Thanks for the kind words, Vilhelm.

I had not heard of ichtyolatry, so i learned a new word today. I also just learned about the Fish Church in Istanbul, Balikli Kilise. (http://www.todayszaman.com/tz-web/detaylar.do?load=detay&link=102460&bolum=132).

Since I can no longer worship the pig, I may consider taking up ichtyolatry.

I had actually never heard of Balıklı Kilise, so thanks for the tip! I'll have to go there when I visit Istanbul next time, I guess, to see for myself what manner of worship goes on there.

Speaking about things to see: Have you seen the Cengiz Han exhibition currently running at Sabancı? I went there this weekend and it was great!

Ichtyolatry... Kind of fishy? ;) Ichtyolatry is clearly an option in lieu of porcupinia. As I myself am born in the year of the pig, I guess I'm stuck with with being a "boar".

just check out the info from the turkish directorate for treligous affairs,aka diyanet. It's the turkish muslim papacy equivalent.

it's a lot easier. one set of timetable per city.