Two days ago, I decided that Istanbul was the perfect city. How did I arrive at this conclusion? I found a jar of American peanut butter at my local mini-supermarket.

You know how Australians get with that vile vegemite? That's how Americans are with peanut butter. American peanut butter is the holy grail. It's the one product I ask visitors to bring with them from home. I always go to Costco before returning to Crapistan and get a supersize jar of Skippy chunky. It's as valuable as gold. Samaya the Azeri cleaning lady (and by "cleaning lady" I mean "lady who comes and sleeps on the couch for four hours twice a week") one time threw away an entire jar, clearly not recognizing its value (truthfully, the blame lies with the Producer for leaving it sitting out next to the sink, but he should fire Samaya anyway for not really cleaning all that much).

Lots of countries attempt to produce this singular product and fail miserably. They are never able to get the proportions of sugar, oil and preservatives just right; never able to perfect the consistency. It's not worth it to buy a local brand; you'll just end up throwing it out in disgust.

So you can imagine my excitement when I found a jar of Peter Pan tucked among the nutella and halva cream at the Or-Ka Supermarket! Yay globalization! 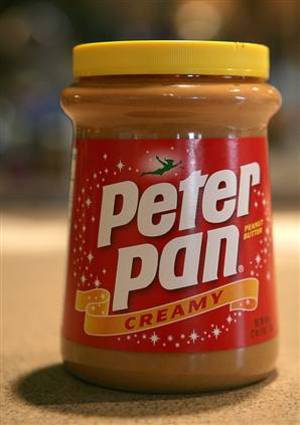 So this morning, apropos of nothing, Carpetblog's Bekaa Valley Correspondent started the following chat:

BVC says: i had to throw out my peanut butter.  first time i have been affected by a recall

BVC says: yes, me too, and it was yummy, but i had to throw it out

Carpetblogger says: how did you find out about this?

BVC says: i read the news

BVC says: there are hundreds of cases of salmonella in the US from them

BVC says: i was also sort of exited by my first product recall experience.

So, now I am faced with a dilemma. There are several factors to consider here.

Posted at 10:13 AM in Food and Drink, Istanbul Expat Life | Permalink

If you believe in peanut butter, clap your hands.

Dear carpetblogger... reading your blog is a highlight of my day... a trip to Baku is in sight .. can you share some informations on where to find your carpet dealer?

throw it out. not because of salmonella, but because peanut butter is satan's own food. horrid, yicky stuff that gets stuck on the roof of your mouth and makes you feel as if you've eaten a nice blend of hardboard and wallpaper paste. enid was once treated to a reese's peanut butter cup by an expat american who thought that these sweets were the closest thing to sugar-based heaven. enid nearly threw up, but couldn't show it because she'd taken this poor man's second-to-last reese's peanut butter cup in the whole world.

sorry, she's with the australians on this one. vegemite, yum. marmite, double yum.

You people are savages. Enid, I was going to reveal the secrets of El Toro Taqueria to you, but based on that comment you're going to have to find your own best mission burrito. I once carried one back to Portland for the Producer. We used to live in Noe Valley.

bah, enid's grumpy now. she likes good restaurant advice and she can't help not liking peanut butter. it's genetic; she's english. (enid and the man nearly went for a house in noe valley, but then this one found them the day afterwards.)

Keep it! Risk it! You know you want to :) Just eat it and pray for your life!

By the way... Australian Peanut butter is THE BOMB. You should try it.

PS> EAT IT and stuff the warning!

You could somehow cook the peanut butter to kill the salmonella. Put it, sealed, in a pan of boiling water for 20 minutes. It could ruin the peanut butter, of course, but with that many preservatives I reckon it can take it.

I am not, I should add, a doctor. It may require more than 20 mins in a pan of boiling water to kill salmonella in jar.

I admit this has become a bit of a tempest in a teapot. I am going to America in a couple weeks, so I can get as much PB as I want. Still, I haven't thrown it out yet.

Though PN, your suggestion is compatible with my existing skill set. I boil good!

tricky one... love PB, however this is a smooth one, not crunchy, so therefore less valueable. Not sure on the boiling tactic, but it sounds interesting.

If it was a natural peanut butter like Adam's, I would say boil away. It would be akin to home pasteurization. But Peter Pan may have stabilizers, fillers, and good ol' persatives. I'm not sure how they reactive to heat.
I have a tin foil stomach, no intestinal foritude whatsoever. I always get some sort of stomach thing on every trip, worst was in Sweden of all places.
If you do risk it, hopefully you have access to Gatorade, the best cure for post food poisoning dehydration.

Why boil it? Why not freeze it? Surely if you "boil good" you must make lovely ice cubes.

Can't imagine what boiled peanut butter would taste like.....
There was article on slate about the salmonella thing http://www.slate.com/id/2160235?nav=tap3

And Anna, my mom made us eat that adams stuff when we were kids in an ill-fated effort to shield us from those preservatives. I hated that stuff. The preservatives and the sugar are what make it so goooooooood!

Peanut butter, sure I understand although if I added salt to the stuff I found in Istanbul, both in Mecidiyekoy and Atakoy supermarkets, it wasn't so bad ... but Vegemite, that is brown gold ... ! writes the Yeni Zelanda.