« Checking In With the Carpetdogs | Main | Ask Carpetblogger: What's the difference between Iskembe, Kelle Paca and Xas? » 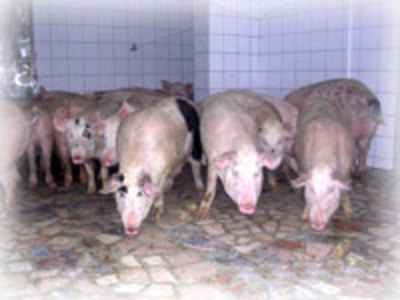 So, two white girls walk into an Istanbul ghetto, looking for the pork butcher.....

This weekend, Carpetblogger and the Beirut Correspondent (a 14-year vegetarian until, uh, last week and now a ravenous carnivore) succumbed to the siren call of the forbidden meat. So, off we went in search of a Greek butcher we'd read about who reportedly specializes in pork.

The extent of our directions: it's "behind a gas station, on the street to Dolapdere in a 'borderline' neighborhood." The 'hood -- Tarlabashi -- has been exposed less to the gentrifying influence of foreigners and artists and more to the, shall we say, chaotic, influence of poor gypsies and Kurds.

Having found the gas station in question, we wandered around back streets that perhaps white girls don't often wander around. We had some reservations about the wisdom of this, but having come so far, we were unlikely to turn back. So we approached some old guys who were clearly wondering what we were up to.

This is an approximation of the conversation:

The old guys reacted the way you would expect old guys to react to white girls asking an ambiguous question about foreign meat.

Armed with this data, we found the signless butcher between a Shell station and a Greek Orthodox church ensnarled in concertina wire. It has served the neighborhood's remaining Greeks and foreigners achin' for some bacon since 1962. Indeed, the forbidden meat, especially the peppercorn encrusted homemade salami is very very good. With some salami, and some bacon, and some sausage, we departed happy.

Some other time we'll talk about another popular joke that starts "So, this white girl with two dogs walks into a wine shop..."

Posted at 05:22 PM in Food and Drink, Istanbul | Permalink

This is where Pristina is much more civilised. To get pork you just jump into a car and go to the nearest Serb village 5 minutes away, which is very happy to service the infidel invaders. At least, the pork restaurants make a large contribution to the local economy and are quite often fully of army types in full uniform.

No wonder the Serbs are against independence and the withdrawal of the UN army.

Thank you for this great laugh of the day! I have known people who were mugged in the streets and they were only on the main road next to Dolapdere. Glad you were safe that day!

I know Carpy must follow his devil, as any great writer. But this pearl deserved more, a description of the Greek shopper, say, whatever.

how were the prices? Pork meat is so expensive in Istanbul. You'd think that since it's forbidden, it would be dirt cheap. Nice post :)

LOL, that is funny! Pork is soooo good when you are in a Muslim country. I flew to Malta one just to have canadian bacon when I was in the Margreb for four months.