Things that Come in a Box: Sheep

Iyi Bayramlar! Today, tomorrow, Saturday and Sunday are Kurban Bayram (Eid al Adha), the Muslim celebration of Abraham's willingness to sacrifice his own son for God/Allah/Yahweh. It also marks the end of the Hajj in Mecca.

Today, Muslims have an animal slaughtered, then distribute some of the meat to the poor and use the rest for a big feast. Non-observers admire carcasses hanging in public places where carcasses usually aren't and step over guts in the street. 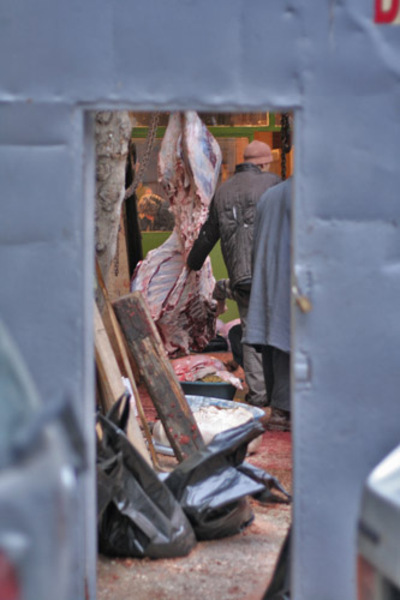 There are a couple of ways believers can fulfill their obligation, at a variety of price points. Old school observers, like my neighbors, commandeer a depo, or storage space, bring in a cow, slaughter it themselves according to Islamic principles (halal) and make the womenfolk strip the carcass of every last useful morsel. When I walked by this evening, they were loading up a sedan with black plastic bags full of meat. This is probably the most economical option and the one preferred in Baku.

Halal slaughter is pretty straightforward: a prayer is said, the animal's throat is cut and the blood is allowed to drain out completely. It's not the most cruel way to do the job, as these things go, but holy moly, there's a lot of blood.

That's why the Beyoglu municipality has established Kurban "Butchery Places," in an attempt to centralize this activity and discourage people like my neighbors from housing a herd of sheep in vacant lots and filling the streets with blood and offal. How very European!

My neighborhood's temporary abattoir is at the same carwash where I washed my carpets this summer. As the sign says, a "big head" costs 150 YTL, or about $125 (a cow or maybe even a camel) and a "little head" is 50 YTL or about $43 (a sheep or a 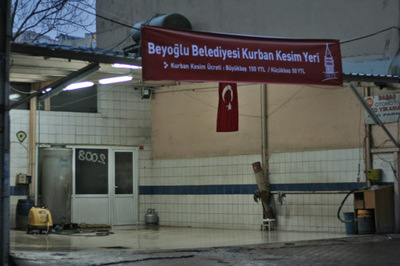 goat, although I did threaten a disobedient carpetdog with a trip to the carwash today). The better off you are, the higher quality animal you are expected to contribute.

Much debate about this pricing structure has ensued. Does it or does it not include the animal? Does it include complete butchery? Does it include distribution services? No one can decide if it seems like a lot or a little money. How do you decide what poor people to give the meat to? Inquiring infidels want to know!

I took this photo at about 7:30 this morning, while prayers were still going on and no one was sacrificing anything yet. As you can see, there's a powerwasher ready to wash the blood and guts down the drain and into the Bosporus. An interesting bit of trivia: this carwash is on Boğazkesen Caddesi, or "Throatcutter Street." 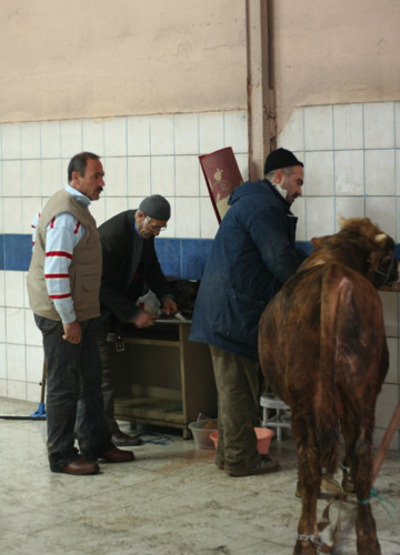 in the day, I paid a second visit to the Kurban Kesim Yeri. Lucky for me, they had a cow there and were sharpening the knives. And, I mean lucky in the sense I got there just in time to get a picture before there was any death struggle or gushing blood. It was quite the event for the family that had purchased the cow. They posed for pictures with it and a seven year old boy documented the process with his digital camera.

Since Turkey is a country with an urbanized, middle class population, it makes sense that there are ways one can meet one's spiritual obligations without getting one's hands bloody.

Some charitable foundations offer sheep for purchase, though this banner from the Lighthouse Foundation is pretty light on the details. Sheep are available for 210 YTL. I don't know if that means a sheep is slaughtered and distributed on your behalf or it comes to you pre-slaughtered or what. As a consumer, I'd want to be a bit more informed before I proceeded with this option. The last thing I'd want is a sheep 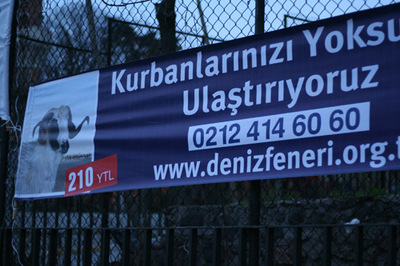 delivered to my front door kicking and bleating and blank eyed and smelly, as sheep tend to be.

Of all the options, I think there's really only one for me, if I were a believer.

Go to the Carrefour!

Earlier this month, the Carrefour in my neighborhood was offering sheep in a box! Since sheep are the only animal held in lower esteem on Carpetblog than monkeys, I can't think of a better place to put a sheep. Just like your Thanksgiving turkey, you can order in advance and for about 300 YTL a sheep in a box arrives on your doorstep, already butchered. I'm not sure how distribution to poor people fits in to this scenario, but I'm pretty sure this is the option I would choose.

Here's another fun bit for you. You probably have noticed by now the deep mistrust Turks hold for organized charities asking for donations. Turkish Red Crescent has a solution for that this year. You pay them for your 'kurban,' they slaughter it in front of a notary public, film it, make a VCD of the slaughter, and send you the 'evidence' along with 1/2 kg of the meat ('kavurma', not the spoilable fresh version). The rest goes to the poor. They figure this scheme will give them an edge over the other charities who don't provide such high-tech evidence of the good deed actually getting done. Here's the link:

On the other hand, when I mentioned this to a local shopkeeper he immediately theorized that they probably have three or four films of various animals getting slughtered a VCD duplication machine. Just has to be so, y'know, because, 'they' are always out to con us.

Bulent! I am so glad you responded. I knew you would give me the information I was looking for, and maybe even some I wasn't!

First of all, I cannot for the life of me figure out what Ulastirmak means in this context. Please translate!

Second of all, that story about the charity is 1000 kinds of awesome.

Ulastirmak in that context roughly means to deliver. To my Turkish ear the meaning is more like "we make sure it reaches the poor."