Monkeys In The News

I know that I shouldn't be giving monkeys the attention they crave, but there have been two monkey-related stories in the last few days that I cannot let pass unremarked upon.

People have asked, "Carpetblogger, why all the hate on monkeys? They are so cute. 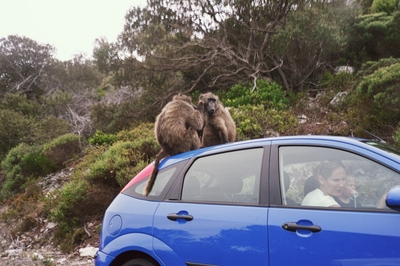 And clever, too!" No, they are not. They are humans without the impulse control. Think about how most humans who DO have impulse control behave and you might begin to understand why I find monkeys so very, very troubling.

First, via Foreign Policy's Passport blog, comes news that the Himachal Pradesh government is hiring unemployed youth to sterilize rogue monkey populations with lasers. How many kinds of awesome is that idea? Though neither a youth  nor unemployed (well...), this is the kind of do-gooder humanitarian scheme that I can really get behind. Looking for tickets to Dehli and lasers on E-bay TODAY!

But the best part of that post is this quote from some pinko, conservationist monkey-lover who takes issue with the whole idea:

Can you imagine what having badly sterilized monkeys running around will do to the levels of aggression?

No, actually, I cannot because I am too busy imaging my levels of aggression as I run around tasering monkeys in the balls!

The second post comes via Gadling and is a stunning collection of monkey attack video porn (OMG! Imagine the google hits I'll get with that phrase!). That blogger, who took a bunch of bananas to feed the scabby, red-assed rodents the Monkey Temple in Katmandu (exactly where my open hostility toward monkeys evolved into a genocidal rage), must have been absent on the day they taught "cause/effect" in logic class. Though if retards stopped feeding the little menaces, we would not be able to enjoy videos like this one:  nor would the opportunity for ordinary citizens to sterilize monkeys for fun ever present itself.

So, folks, keep feeding those monkeys!

Ok, is it just me or do they look like little, furry vampires?

I'd buy a laser and join you... or rather a blowtorch just to make sure no dangling bits escape. Anyone who thinks monkeys are cute and clever is a fool waiting to have his body mauled by a food crazed simian. This guy in the video got off too easy I think...

I KNEW you would be on my team. Around here it's so hard to make people understand the nature of the monkey menace. They think I am the crazy monkey lady.

When they come, we'll be ready.