Are You Going To Kazbegi?

You certainly should! Carpetblogger and the Beirut Correspondent headed up to 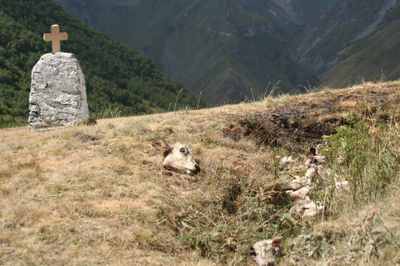 the Caucasian village in Georgia two summers ago and had a great time hiking around the Holy Trinity Monastery, listening to polyphonic singing and falling into pits filled with sheep heads.

Hans at Kaukasus alerted us to the helpful, well-written site Kazbegi in the Caucasus that details all the homestays in the villages located around the 5000 meter (16,500 feet) Mt Kazbegi. It includes great details that remind me why Georgia is such a bad-ass place to travel, such as:

"At the time we visited the homestays in Jutta, the village didn’t have any phone coverage. That’s why there are no phone numbers listed, ask the locals! But try to remember the first name of your host—because the surname for all the people from Jutta is the same: Arabuli."

"The friendly family might want to give you their huge Caucasus dog as a present."

A giant Kavkaz shepherd is the perfect souvenir from a trip to Kazbegi! 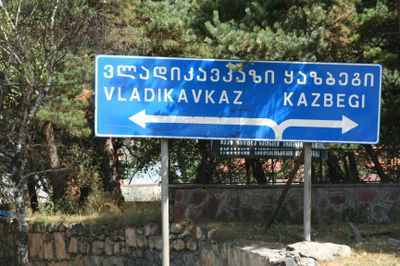 Regular readers know that, over the past four years, members of my household and I have gone to war with various kinds of vermin: Cockroaches in a computer, rats in a washing machine, feral cats attached to a carpetdog's head, and of course, primates.

But lately, I have been struggling with a mysterious force that has challenged me in new and troubling ways. This adversary is particularly vexing because I have never once seen it, only wiped its slime off my shoes and the entry carpet in the mornings.

Our ground floor is more or less below ground, at about street sewer level. This has a lot more cons than pros. The house is poorly ventilated so at best, it smells musty fusty in the guest quarters. At worst, it smells like raw sewage, and not just when it rains. This doesn't deter as many guests as you might expect. We have issued a lot of frequent stayer cards with the caveat "management ignores complaints about the sewage."

They come every night. Evidence of them is abundant -- every morning there are slivery trails of slime along the edge of the walls and cursive loops on the carpet. Now I can keep odd hours --coming home late, leaving for the airport early, arriving home early from the airport. I have never seen a Night Slug.

As a native of the Pacific Northwest, I know from slugs. Banana slugs. The great grey garden slug. The spotted leopard slug. I once saw a banana slug the length of my forearm in front of an outhouse (that outhouse was at Sammamish Bible Camp where I accepted Jesus into my heart in an unrelated incident, not in our backyard, k?). But even in my ancestral home, which far too often sheltered undomesticated animals, slugs were not allowed.

Because slugs were more common in my childhood than dogs and cats and sheep, I learned how to massacre them early -- cups of beer, a squirt of ammonia and best of all, salt. You have not LIVED until you've salted a slug and watched it instantly dehydrate like a living raisin.

I figured Turkish slugs would be no match for a native Slug Master like me. I placed salt all around the baseboards. Imagine my horror when there was no noticeable decrease in slug activity. Apparently Turkish slugs are immune to salt.

This frightens me. What kind of invisible mutant slug is immune to salt? But you know what? It doesn't frighten me half as much as some of these helpful slug hints that I found while searching for slug pictures. (It says it's a quiz, but they're all true. Proceed with caution. Highlight: Slugs produce mucus so strong that they can hang from it in midair to copulate, which they do, at the ends of stretchy mucus strings more than a foot long.) In fact, that list -- which could only be published in a Seattle paper -- derailed this whole post.

So memo to guests: watch out for copulating slugs when you get up in the middle of the night. Management does not accept complaints about those, either.