Carpetblog could not be what it is had its author not been educated in the Jesuit tradition, which encourages a healthy skepticism toward authority figures as well as tolerance for recreational buggery. Of course, unintended consequences are not unheard of, including, but not limited to, atheism and astonishing late-in-life revelations like the one we had the other night.

We haven't spent a lot of time thinking about our high school or its mascot over the past 22 years. That is until, in the course of a meandering, wine-fueled conversation with a friend the other night, we recalled that our high school mascot is The Crusaders.

The what? You mean the Crusader, which in some circles (see: Islam) is seen as shorthand for 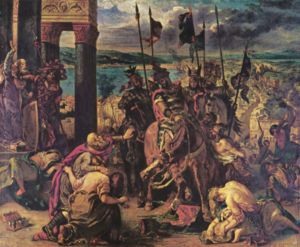 imperialism, aggression and state-sanctioned religious intolerance, was our high school mascot?  You don't say! How did it take this long -- not to mention four years of living in Muslim countries, including on the battleground one of the most infamous Crusades -- for this to occur to us?

Let's say for the sake of argument, you think that securing access to the Holy Land (controlled by Muslims) and spreading Christian faith (also known as "converting or killing Jews and Muslims") were legitimate military goals. Even so, you'd have to be off-put by the Fourth Crusade, the one in which the the Crusaders got distracted from their goal of liberating the Holy Land via Egypt and sacked Byzantine-controlled Constantinople (also known as, "the one where Christians killed Christians") instead. A fun fact!  The Fourth Crusade took place in our Istanbul neighborhood! From Wikipedia's entry on the Fourth Crusade:

The Fourth Crusade was so unseemly, Pope JP II apologized not once, but twice. I guess we now know what it takes to pry an admission of guilt from the Church.

I'm willing to entertain the thought that over the course of 14 years of high school and college, I wasn't paying attention on the day a teacher suggested that there might have been an alternative narrative to the Crusades. I wasn't paying attention through multiple semesters of algebra and French either, so nothing can be ruled out. But that no one mentioned our high school mascot could, to some observers, represent not just widescale killing of Muslims, Jews and Greek Christians, but also elective war and military failure, seems like a pretty substantial oversight. Has this not occurred to any authority figures at Eastside Catholic? How come it's not taught in Sophomore religion class, right after the part about the whole Bible not being so much "fact?"

We hate it, too, when the forces of political correctness spark uncomfortable debates about beloved high

school mascotry, especially when the word "Crusader" can be so easily disassociated from its bloody past. Still, are there any Catholic high schools out there with the "Inquisitors" or "Pedophiles" as their mascot? (The Producer was somewhat relieved to recall that his Jesuit High School's mascot is the less polarizing "Marauder.") The Issaquah Indians (my hometown high school) even had to change their name under pressure and everyone loves Indians and their casinos.

Because we know how sensitive topics like these can be, Carpetblog thinks increased dialog is important. To start with, we propose a friendly soccer match between the Eastside Catholic Crusaders and the South Peshawar Jihadis.

Posted at 03:29 PM in All About Carpetblogger, Religion | Permalink

Never mind the bright sparks who think 'crusade' is still an appropriate term for Christian proselytizing movements. Billy Graham crusades and Campus Crusade for Christ are the obvious ones...

Aren't there any good-vibes mascots? Either of them both made any good for Israel, the holy land, and don't have to be remembered. What about any Moshe Rabenu macot? :)