We've often pondered whether groups that fund terrorists deal with the same challenges that face organizations that give grants for things like democracy promotion or humanitarian projects. How do you decide whom to fund?

Does Al-Qaeda issue RFPs on the USAID model?  How is capacity measured? How is sustainability defined? Do they demand documentary receipts for explosive purchases? Are there strict "Buy Pakistan" procurement regulations or "Fly Saudia" requirements?  Surely, the average terror grant giving organization must get a lot of fucking stupid ideas coming in the door. How do they deal with proposals offered by those who are clearly incompetent?

This "stupid terrorist" meme is a rich vein. So rich, in fact, that The International Man of Mystery and his sidekick Young Coconut, with input from The Producer, have made a short film about Nib Nedal (can you read backwards?), the world's worst terrorist. Called "A Free Radical," it premiered at Cannes a month or so ago to the kind of acclaim that can only be achieved when bananas are beheaded on film. A Free Radical deserves a wider audience, so I have been advocating for a You-Tube posting, but to no avail. I digress.

So, how does the Terrorism Funding Organization (TFO) respond when presented with a grant application that is so incompetent that the only response is "How stupid do they think I am?" This has to happen all the time, especially if the grant seekers come from the more medieval areas of Pakistan or Afghanistan. Or perhaps, Turkey. There is no evidence whatsoever that the attackers of the US Consulate last week had done much else than herd goats and work in textile factories. That had to have been clear in their grant proposal.

Seriously, who thought funding the attack was a good idea?  Did not the line item for "hiring a random 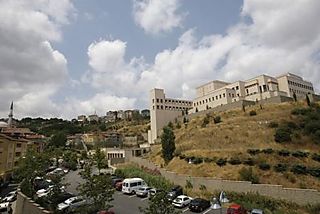 taxici to take us and our guns to the U.S. Consulate" raise any red flags with the grant committee? How about a workplan that included "leaping out of a taxi at an armed guardpost and firing indiscriminately"? Even Nib Nedal could have come up with a better idea.

Let us pause to explain how utterly ridiculous the idea of attacking the U.S. Consulate in Istanbul is. The Consulate is about 20 kilometers up the Bosporus, stuck on the side of a hill in a

typically overbuilt Turkish settlement called Istinye. Surrounded by multiple high walls and built from pale brickwork, the words "prison" and "high school" come immediately to mind. Even though we are not professional terrorists, we can tell that attacking the consulate from anywhere but the air would be very difficult.

Even with all the unquantifiable benefits that come with holding a blue passport, there's nothing about the approach to the consulate that says "welcome to America, we're glad to see you!" It's more like, "prepare for your complimentary cavity search." This has always bothered us, since almost everyone is coming to the Consulate to get visas to visit America. Although truthfully, foreign visitors would be well served to accustom themselves to being insulted and offended well before they even attempt to breach U.S. airspace. A word of advice: if you ever arrive at the Consulate by car, it's best to jump out while the car is still moving, lest you attract the attention of heavily armed and itchy-fingered guards.

So what did the attackers think they were going to do next, assuming the three were able to kill all the guard standing outside and proceed unhindered? As soon as the shooting started, the whole building was locked down, guaranteeing that no one was going to get past the first guard post and into the building anyway. Then, the Marines were waiting inside the walls and we get the impression they don't fuck around.

To be clear, we're not making light of the attack. Not only were three Turkish police officers killed when they took the brunt of the attack and bravely killed the three attackers, our beloved Chiplomat works in that building.

In response to the tragedy, we have pledged never to mock U.S. embassy design until our diplomats -- and the nationals that risk their lives to guard them -- are no longer exposed to armed retards with impulses unrestrained by common sense.

I remember when I began reading your blog posts and how entertained I was; I just had to contact you. I thought this woman has either got to be a comedian or a very serious marketing writer. I still think both.

This article is so profound that I'm going to just put a note on my own blog and link to it. It's one everyone should read. I guess it takes all kinds to try to penetrate a consulate in a no-way-out place such as Istinye, but what's more, how do they get approved for their grants? This is a mystery.

Just from a glance at that photo, an air assault would not do much better. If you are thinking 1) parachuting in, well possible, but I doubt they would get farther than outer courtyards. Landing on roofs works if you are ready to use (and have access too) large explosions in VERY small packages. Bigger than a hand grenade. Plastic stuff would do the trick. But that makes a lot a noise, locks down the place, and gets angry Jarheads outa bed. 2) An open aerial attack, from say, big boys with fighter aircraft. And something inside had better be pretty important to blow up, cause violating Turkish airspace is going to piss off the TAF. And we sold/help them build LOTS of F-16's. Plus the Jarheads who will be gotten outa bed. The ones that sleep with a surface to air missle within arms reach that is. And 3) Kamakazie/9-11 type attack. Turkish security at the Airports in Istanbul is pretty good, so that doesn't worry me. That and they once again piss off the TAF if they do that. Doesn't take long to scramble fighter aircraft if a plane is hijacked. So you have about 3 minutes to locate your target and crash your plane for maximum destruction. If your flying a cessna, you scratch the walls. But a big plane full of fuel would, well cause WTC damage. But a LOT of innocent neighbors would get killed too. Sorta defeats the purpose when it comes to propaganda.
But anyone stupid enough to do that would have to be using turklogic in conjunction with turknology. A scary combination, if not overly deadly.

Um. Wow. Roy. You've really spent a lot of time thinking about this! Next time I plan to fund some terror, I will definitely ask you to submit a proposal. Yah. For sure.

Am posting a link to this on my blog--priceless!