« Lots of Photos from Yemen and Saudi | Main | Ask Carpetblogger: What's the Word for Cockroach in Turkish? »

With mandatory wine consumption quotas and creative menus, Sunday dinners chez Carpetblogger- Producer have always been a coveted invitation. Not surprisingly, given the volatility of some of the guests, dinners get out of hand from time to time. What started out as a low key event with a small, well-behaved guest list on Sunday night turned into a near-riot that involved a rusty meat cleaver,  at least 15 neighbors and a midnight trip to the police station.

We often make fun of our gentrifying, too-cute-by-half Cihangir neighborhood. With its twee cafes, gourmet food stores and antique shops, it's easy to forget that there are plenty of residents of "Yabancı Köy"(foreigner village, as we call it) who don't spend their days sitting in Kahvedan. Istanbul is full of migrants from the Anatolian hinterlands and even in Cihangir, the veneer of urban sophistication is thin indeed.

Many of our neighbors brought the Willage with them when they migrated to Istanbul (for stories about our Sokak, or alley, try these or this) A five-story apartment building houses a single extended family who communicates by 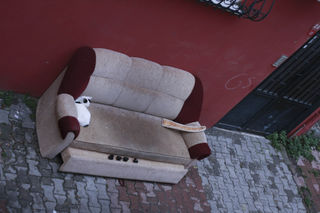 shouting from window to window. With feral children roaming freely, there's no such thing as a quiet summer evening. The vacant lot on the far side of our neighbor's house would be less offensive as our fantasy Pig Sanctuary than as the repository for old furniture it is now. Baroque domestic disputes entertain and appall us.

Deli Komşu ("Crazy Neighbor"), a man in his fifties who lives in the five-story apartment building, is typically at the center of most domestic disputes.  Not only is he mentally unbalanced, he's often drunk. Unable to speak, he communicates by grunting loudly. If he's been drinking, he goes on inarticulate rampages in the sokak, usually at 3 am, causing neighbors to lean out on their window sills, clicking their tongues and shaking their heads. Until Sunday night, Deli Komşu had been little more than a nuisance.

As the only person in our immediate circle of contemporaries who "goes to an office" every day, the Chiplomat departed Sunday Dinner relatively early. Her RAV-4 was parked in the Sokak, in violation of no rule, written or unwritten (though with her green plates she could park in the middle of the freeway if she wanted to).  Her departure apparently infuriated Deli Komşu to such a degree he began to hump her spare tire. He'd already keyed her doors.

In violation of several well-known rules and vows, the Producer happened to be standing in the Sokak smoking a cigarette. Never one to let a spare-tire humping go unremarked upon, the Producer calmly suggested to Deli Komşu that, even under our new kinder, gentler Muslim-loving regime, he might think twice about fucking with the Chiplomat.

Deli Komşu responded by pulling a knife on the Producer. The disarmament process created enough of a stir that the evening's other guests, which included Carpetblog's Paris Correspondent,  her boyfriend the Fixer and Our Pirate Spokesman, spilled out in the the sokak, along with at least 15 neighbors, several passersby and two Carpetdogs.

The Fixer, who happens to be Turkish, called the police and issued an appeal for calm. To preserve evidence for what we were certain would be a thorough police investigation, the weapon -- a silver switchblade -  was wrapped in a napkin, CSI-style. To preserve the physical integrity of Deli Komşu, the Producer was sent inside. The rest of us followed.

Deli Komşu was still agitated. Standing below our window, he made slicing motions across his his throat and fondled his crotch. He then punched his hand through our glass front door.  The matter having reached a point of urgency, The Fixer called the the police, who are a strenuous five minute downhill walk away, again.

Astute readers might ask: What were the carpetdogs doing during all this? Answer: Absolutely nothing. An investigation is underway. 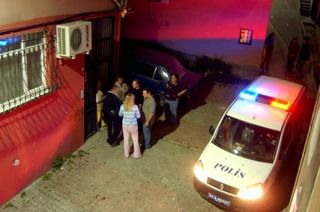 Apparently the other residents of the sokak had had about all they could take of Deli Komşu. They urged us to cooperate with the police, who, once they finally arrived, quickly got fed up with Deli Komşu's ranting and handcuffed him. To manufacture some additional drama, his female relatives began wailing in protest. A policeman stepped inside the apartment building foyer to negotiate a settlement among multiple aggrieved and highly vocal parties. He emerged holding a rusty meat cleaver.

The incident evolved into a civil society capacity building project. Our neighbors were so committed to the idea of committing Deli Komşu that several of them piled to the police car to go to the station to make a statement. The Producer, The Fixer and Our Pirate Spokesman walked up to the station on Tranny Street, opting not to ride in the police car with Deli Komşu.  The "Useless Women" stayed home, watching Mad Men episodes and drinking cognac.

Deli Komşu was not without representation. As part of an appeal for his release, one of Deli Komşu's relatives took a counterintuitive approach -- "but he pulls knives on me all the time!" The police were having none of it, nor were they tolerant of Our Pirate Spokesman's attempts to document the process with his camera phone. Knowing the propensities of Turkish police, he's lucky all they did was toss him out in the street. They let him back in after he complained about the cold.

As far as we know, Deli Komşu is locked up until a judge decides what to do with him. What happens next is anyone's guess.

On Monday, the sokak was silent. No  activity came from behind the drawn curtains of the apartment building. Deli Komşu was no where to be seen.  No one stopped by to say, "uh, sorry about that whole thing last night." Perhaps no one wanted to feel troubled by a sense of obligation to pay the 80 YTL to repair our window. Since Turks can only be truly shamed, apparently, by the actions of women, we doubt the silence emerged from any sense of embarrassment.

Excellent reportage! Not only did Deli Komsu grab his crotch, he made a rude gesture that involves forming a circle with his thumb and index finger... soon thereafter one of the neighbors gestured in a way that seemed to be saying that the nutjob had a gun. None was found, so maybe she was just asking the Western Cowboys to shoot him?

Oh, and the "useless" women at the dinner party, dubbed thusly by the Pirate Spokesman himself, stayed back at the ranch to watch a couple of very fun episodes of a TV show so appropriately titled for this evening: Mad Men

Clearly, the producer's fault for getting between a man and his tire. Never underestimate the seductive powers of rubber.

Another entertaining Sunday dinner! Sounds like the smartest ones were the dog children.

Wow and I was thinking to rent a holiday apartment on my next visit to Istanbul.. hmmm.. I have to rethink that...I was looking at the Cihangir area.. may be I sohould just stick to boutique hotels..

Wow! Way to hog all the interesting domestic disturbances! I am beginning to regret McCain losing because if he won I was threatening to move in with you!

This would have never happened if McCain had been elected.

oh go ahead and book your trip. this was CUKURCUMA, one 'hood over from Cihangir, which has a much classier bunch of nutjobs.

Yes, but were YOU wailing? Or, laughing at the Producer who got himself in this mess by defying the non-smoking part of the vows....certainly entertaining, the Producer is.

My, but my dinner parties are never so interesting as this. Clearly, I need to up the alchohol content. And perhaps farm some out to the neighbors as well.

Wow!! Are we going to be there during one of your dinner parties?