« A Bayram Visit to Cowshwitz | Main | Ask Carpetblogger: What are your options if your pet dies in Istanbul? » 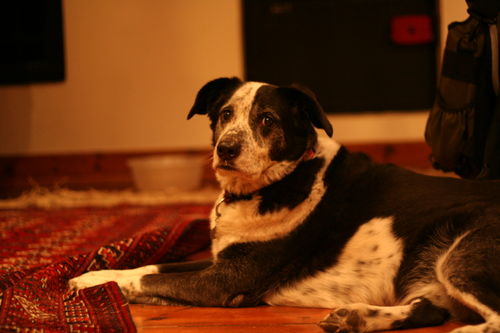 After a long decline and a quick illness, our friend Mo left us Monday afternoon. Now we have only one carpetdog and she's as sad as we are.

You know how some people are about kids? That's how we were about this dog. He was also exhibit number one for why we should never have kids -- we openly favored one dog over the other, played them against each other, left them both for a year with a complete stranger while we traveled around the world and frequently let basic principles of obedience slide.

Mo was 14 and lived in four countries, as well as in San Francisco and Portland. We got him in August, 1996 from the San Francisco SPCA at 11 months old. He flunked out of obedience class twice and never achieved Canine Good Citizen status that would have opened all kinds of doors to him. A herding dog with no herding instinct, he was still always able to identify the "stupid sheep," the person in the room whom he determined needed a little extra supervision (Red State Sibling was the original stupid sheep). Despite being unnaturally attuned to the emotional state of humans, he was unable to distinguish between public displays of affection and aggression, and would loudly insert himself between people engaged in either, except, inexplicably, when the Producer had Deli Komsu in a headlock.

People who knew him in America would be surprised how much he'd slowed down over the last few years. People in Istanbul, Kyiv or Baku never saw him keep up with the greyhounds at the park, hike 12 miles a day or chase a tennis ball until he collapsed in a heap in the grass. Years of hard living left him crippled with arthritis but I have the sense he had few regrets. By the end, we held him together with baling wire and duct tape.

After bad vet experiences in Baku, we had deep reservations about the quality of vet care in Istanbul. Fortunately, Dr. Elif Turan at the Anipoli Clinic in Cihangir provided compassionate, highly competent care until the very end, even though I second-guessed her every step of the way. She methodically ruled out possible diagnoses and bird-dogged new treatments that she thought might extend his life. When he couldn't walk the three blocks to her office, she came to the house to keep him comfortable. She was compassionate enough to know when to quit and how, despite a cultural gap the size of the Bosporus, to communicate her thoughts to us.

Having gone through both birth and death here in Istanbul, we feel a profound sense of community and support. As the unthinkable became unbearably thinkable, dear friends stepped up to help coordinate details that neither of us could face. For this, we are grateful and indebted.

The whole experience was as awful as it always is, but probably not sufficiently so that, next time we see a cute puppy, we will remember how, in the end, animals always break your heart.

Posted at 09:26 AM in Carpetdogs, Istanbul Expat Life | Permalink

I'm so sorry. Both my dogs were put to death last summer by the Humane Center of San Mateo county, and I still cry almost every day.

My condolences to you. This is always so hard. I had a cat who died of kidney failure at only 3 years and I swore I would never have another animal and I had a cat back in my flat in 7 months. As hard as it is to let them go, think about how empty your life would have been if they had never been in it in the first place. Hang in there.....

I read somewhere that we must cherish our animals because they provide the quiet comfort we can't find elsewhere. (Mo was anything BUT quiet, but he still had that unconditional love thing going on....)

Oh no, that's terrible news. I'm so sorry to hear of your loss, clearly Mo was a fantastic dog.

As a dog lover and a lurker, my deepest sympathies. I'm so sorry.

I'm so sorry. What a sweet face that dog has. Obviously a very-loved soul. I so enjoyed your story of Mo. Please give your other carpet dog an extra dose of hugs and kisses. And celebrate Mo's life.

I still have a dog, Albi, my Hungarian princess. And, no doubt, she'll break my heart eventually...

I am so very sorry. Mo was one of the last great production dogs. I have always lived vicariously through my friends pets and Mo was always a favorite. I will miss him greatly

I'm really sorry and sympathize with the depth of your love for your dog. Peace to both of you through this difficult time. Kim

Good Citizens rarely are any fun, anyhow. Mo was fun. Always fun. You know, he was the only dog my Yellow Dog would ever play with.

My heart is broken! Since our little girl also came from the SFSPCA, I feel as if they are somehow bonded, separated though they are in age by a solid decade. Know that you gave him the best life he could have hoped for, especially considering the fate of so many un-rescued surrendered dogs.

I am not a stupid sheep!

I am so sorry. As I look at my beloved monster/cat, wondering what evil thoughts are filtering through her puny brain, I am reminded that we humans need someone to keep us on our toes, put us in our place, and keep us focused on the real priorities - being faithful and obedient servants to the animal kingdom. It sounds like Mo fulfilled his destiny in spades, having thoroughly dominated his humans for many years. Slava Carpetdogs!

Our wishes are with you.

Even though I will never forget that sense of jealousy when Mo took over my spot in the back seat of your SUV.

So, so sorry to hear about this. Mo looks like he was a very noble (if inobedient) beast, indeed. Sympathies.

I'd like to think of Mo chasing skanky Turkish street cats through the streets of Istanbul. Must be doggy heaven.

So very sorry. I never met him, but always enjoyed seeing photos of him on your blog. He looks like a very good dog indeed.

So sorry to hear mo has left you! The dog was a character... won't be the same without him. Here's hoping a cute, clever little creature can fill in the gap someday.

so sad to read the bad news. i've been watching Mo on your blog for years, he really looked like he had great character.

What a beautiful tribute to our Moshan; you couldn't have said it better Christy. He had the ability to be etremely obnoxious one minute and 5 minutes later he was so endearing you just couldn't resist loving him.

The ancestors will miss him so much.......and miss having the police knock on the door on Father's Day because of some random "non good citizen" behavior......or miss having him pee on my leg!

Mo, like all good dogs will be missed by this ancestor. Remember the good times and support Whit as it hurts just as much if you are a dog.

Thanks to all for their kind thoughts. We're finding that the dog we have left is much less disruptive -- she doesn't wake up at 6 am, she doesn't race down the stairs barking her head off when someone comes to the door and lies quietly under the table at cafes. Huh. But still.

its always sad to lose a pet.. they become part of your family.. I lost a cat 10 years ago and was never albe to get another pet after he died afraid of losing another and have to have the same heart ach.. I am sorry for your lost..

We had problems with the vets in Baku, and had a very nice vet here in Cairo, who came to our house, when our dog past away, too.
My condolences. It's so hard to loose a pet.

I am sorry about your loss!

I'm so sorry to hear about one of your loyal companions. We animal lovers know they are like our kids and we treat them as such. Gecmis olsun, Carpetwoman.

So sorry to hear about Mo, Christy. Sara and I wish you our best.