« Ask Carpetblogger: What are your options if your pet dies in Istanbul? | Main | Word of the Day: Buzcu » 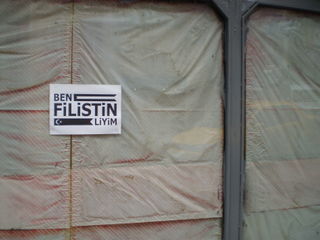 night after delivering a righteous bitchslap to a yammering Shimon Peres at Davos. The organizers of this increasingly irrelevant schmoozefest must have been thrilled, since the event has attracted the creme of the second string crop and produced absolutely nothing newsworthy. Astute choice of venue, Tayyıp.

While we will always applaud a dramatic piece of political theater, wethinks the Dustup at Davos deserves a bit of context. Could mobilizing the base for upcoming local elections have had 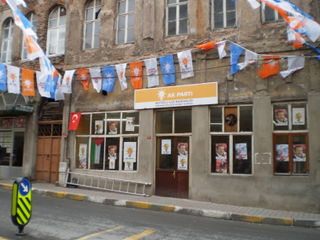 anything to do with it? Or could it serve as a distraction from increasing criticism about the way AKP has handled the Ergenekon investigation?  And, since when did he have a problem with leaders who kill people? This move was purely for domestic consumption.

A Turk gesturing on behalf of oppressed Palestinians is about as politically courageous as an American advocating for a "democratic transition" in Belarus: There's absolutely  nothing at stake and everyone gets to feel good about themselves. Turkey has no aggrieved Palestinians occupying valuable political real estate. There's no chance of instability on its borders. And, it has a population (definitely not a tribe) that needs no excuse to wave flags and express outrage at perceived slights. We don't see any downsides to Erdoğan's outburst except, oh, perhaps a missed opportunity for Turkey to serve as a levelheaded mediator in the conflict, something that could actually help the Palestinians! Maalasef.

Prior to this event, we had planned to give this whole topic a pass. But have a look at the photos of AKP's district HQ/tea garden/smoke filled room, festooned with 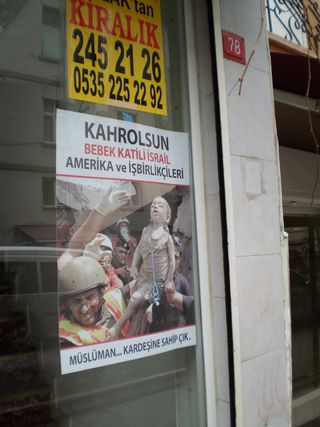 Palestinian flags. There have been more posters of dead babies around the 'hood than at a protest outside a Topeka Planned Parenthood. Banners and booths on Istiklal promote fundraising efforts on behalf of the Muslim brothers, the proceeds of which will almost certainly reach the poor Gazans, minus the necessary administration fees, of course.

The American moderator interrupted him because it was "time for dinner."

I applaud Erdoğan for putting things in perspective: people are dying and he doesn't get the chance to mention this, despite the veneer of all is well in Switzerland for the elites awaiting their third square meal of the day.

I don't disagree that Peres needs to be put in his place, and Erdogan might not have been a bad choice to deliver the message. However, he might have figured out a less peevish way to deliver it. That move was purely for domestic political consumption. And there was not one person in that room who didn't know what's going on in gaza and they went on to eat dinner anyway.

Score one for the meaningless gesture.

Best commentary I've heard on the "event" at Davos, hands down. Once again, you rock.

I agree Tay (we are so close I call him Tay) did that just for his domestic audience. Peres should have asked him how many Armenians it took rebelling before the Turkish army asked them so nicely to leave. Cause you know they held hands all the way to the border.

And sorry to hear about your pet. I know how important they can be.

I'll have to disagree about not having a price to pay. Jewish lobby is angry and they have considerable influence(*) on American policy towards Turkey. Most if not all of our dealings with the congress, not limited to that traditional "business" every April, go through them. Last time when Erdogan accused Israel of state terror he had to go there with hat in hand before going to Washington (Cengiz Candar wrote a couple of columns about how he was forced to do so at the time).We'll see what happens this time.

The message got lost due to the way the message is delivered by the messenger. The act became the focal point rather than the action. But regardless, Turkey will gain some points within the Islamic arena. I hope the short term gain is not a long term loss.

From Israel's standpoint, it can't afford to have another leader in the region. And the short fuse displayed by Turks and their leaders were taken advantage of by the provocateurs. That there is no such thing as 'moderate' Islamic nation to be a model for others.

Turks should not rush to judgment via their emotions; rather examine the long term repercussions of losing their neutrality when it comes to being taken seriously as a mediator in the region.

We should all keep in mind the conflict in the MidEast is a socio-political one, and not a clash of religions. And criticizing Israel should not be taken as hating the Jews and the Jewish faith or anti-semitism...

Totally agree with you TT. Short term political domestic gain, long term regional loss. I'm glad Erdogan took Peres on. I am appalled at the way he did it.

Let's sing the applaud, everybody, Amen! Amen! Amen! Great post and so glad my two favorites have weighed in on the Davos fiasco.