Word of the Day: Buzcu

Our favorite construction in the Turkish language (other than the brilliant "miş" tense, which allows one to disassociate oneself from the information one is relaying) is designating an occupation by adding the suffix -ci/-cu/-cı/-cü to a noun. By using this construction, you create a new word that means "guy who does X" or "X guy" (and it is always a guy, though the word itself is gender neutral).

There is no occupation too small or insignificant to warrant a "-cu" ending. For example, our new favorite word is "buzcu" (booze-joo) or "ice guy."  In fact, we just discovered the existence of buzcular, which doesn't make a lot of sense. If there are yağcilar (olive oil guys), karpuzcular (watermelon guys), turşucular (pickle guys), hurdacılar (junk guys), tavukcılar (chicken guys), balıkcılar (fish guys), a davulcusu (Ramazan drummer guy) of course there will be buzcular.  Turks are logical like that.

In Istanbul, you can't just go to your local market guy (your bakkalcı) or even the Carrefour for a bag of ice for a party. They don't sell it. You have to go to Buzcu Sokak Now, there is no such alley, as far as we know, called Buzcu Sokak*, so don't go asking around for it (and we're sure it's probably accusative too, but, seriously, we've stopped even trying). But since Turks also tend to name alleys after the types of businesses and 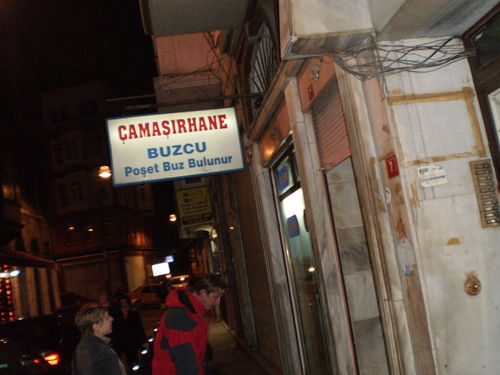 the -cis clustered there and we don't know the actual name of the street, it's become known as Buzcu Sokak in the parlance of the day.

*Buzcu Sokak runs parallel and in between Tarlabaşı Bulvarı and Nevizade/Balık Bazaar, if you need ice this weekend.

Once again the Carpetblogger has provided some incredibly useful info about Istanbul that one simply cannot get anywhere else (at least not in English, anyway). So, for that, thank you. Having just returned from your ancient (and wonderful) city, I could have used this info about the buzcu when we found it difficult to get ice in our hotel in Beyoglu. And, I would have preferred a çamaşırhane instead of the hotel laundry for the simple reason that each pair of socks was 3 Euros, one t-shirt was 7 Euros, and trousers (meaning jeans, I suppose) were 9 Euros. At these prices, why not just throw out the dirty ones and buy new at the nearest Mavi Jeans on the Istaklal? On our previous vacation (in Atlanta), we went to the Chinese laundry next to our hotel and paid $5 for 10 pounds (including, of course, t-shirts, jeans, and plenty of socks). It can't be that they don't have the turknology.

Quantum! You're absolutely right. You can go through life in Istanbul thinking Turks don't have the recipe for ice, until you find the buzcular. Also, it's cheaper to go to some of the camisirhanes than do your laundry yourself, especially since they iron your underwear. That's a luxury that money can't buy.

I am so happy to see that we can all air our dirty laundry out in the open. Israel, are you listening?
:)

Alas, if I had known they would iron my undies, I could have saved 98 Euros and probably never left your fair city!

I'm just curious to know what's the relation between laundry and buzcu:) Completely different and reminded me a photo. Maybe you know it as well. I don't remember which city of Turkey but on the display window of the grocery it was written that " Penguen yemi bulunur"(have penguin feed in store)... Can somebody tell me who feeds a penguin in his/her home? Is here the Antarctic?:)

Hmm, I don't know how far along you are in your study of Turkish and Turkish history but since you seem to like the -cu suffix, perhaps you'll appreciate the play on that in this aphorism: http://sozluk.sourtimes.org/show.asp?id=12097174

(Hint: Turkcu roughly means Pan-Turkist, and some famous 'Turkcu's were not ethnically or racially Turkish.)

Bulent! I'm far enough along in my Turkish history to know there are only Turks in Turkey. That's right, isn't it?? ;)

That's correct. And we're obviously happy to be so.

You might find the following bit of prose from the beginning of the last century interesting (especially since it refers to a US-style notion of citizenship as one of the options). Plus ça change,...

It's the same in Hindi with the word wallah: Laundry wallah = laundry guy, chai wallah = tea guy, etc. Although I'm probably not sharing anything you don't already know. Ditto the habit of naming alleys after the dominant trade or business conducted there. It's an old-world kind of thing: Western Europe used to do the same thing. A lot of your observations remind me of experiences I've had in India, actually, although when I go back I'm re- rather than ex-patriating, since I was born there.