We think that flying planes must be a really hard job. There are so many things to keep track of and gauges and dials to watch and procedures to follow. And, to think, you might be expected to do all this with only a few tea breaks on a two-hour flight. Exhausting! 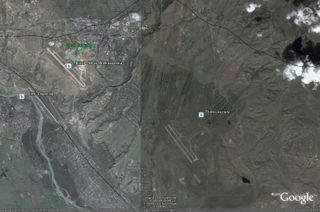 To us, one of the hardest part of flying planes must be knowing where the airport is. You're expected to accurately land your plane on a little strip of tarmac, in between mountains and buildings and other obstacles, sometimes even in the dark, every single time! If only there were some modern technologies available that could tell you the precise coordinates of the Tbilisi airport instead of, just as an example we're going to pull out of our ass,  a military airstrip 20 kms from the Tbilisi airport.

Normally, we might let a "WTF?" incident like this pass unremarked upon, but Carpetblog's Kathmandu Correspondent happened to be on the flight and provided illuminating details. We felt this story needed to be told from the perspective of someone who had 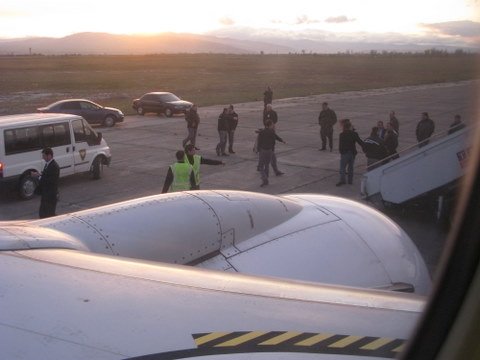 her photo taken by uniformed Georgian soldiers with camera phones as she deplaned, 20 kms from her actual destination. "The flight crew refused to believe me when I told them we  weren't actually at the Tbilisi airport and responded, 'of course this is Tbilisi.  We have very professional pilots. How could we not be in Tbilisi?'" She also notes, "when the pilot realized the mistake, he turned the plane around and tried to take off again but was stopped by military vehicles screaming down the runway."  Also? Apparently, there were actual sheep on the runway. You can't pay for illumination like that, can you?

We here at Carpetblog can hardly blame the THY crew. For all they know, all 737 passenger jets landing in Tbilisi are met by tanks. Those Caucasians are unpredictable and hotheaded. And it's super easy to get a pock-marked military runway recently bombed by the Russians mixed up with the runway of the Tbilisi international airport, which was designed and built by Turks.

But, then again, we're just a blogger, not a pilot. No one has ever asked us to land a plane  at the correct airport. If they did, they would have to expect a bit of trial and a lot of error. Fortunately, though, if our current gig as an incisive social commentator doesn't pan out, Turkish Airlines is hiring pilots! We're filling out our application STAT! We know exactly where the Tbilisi airport is, although our skills with the A320 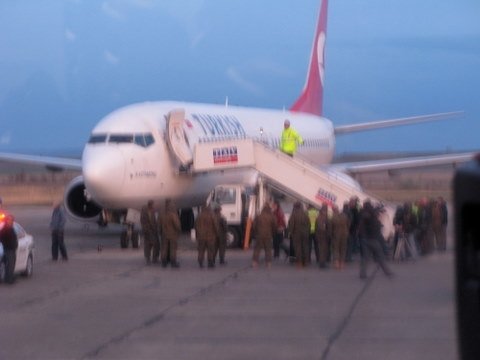 So, THY, should you be paying attention, Carpetblog's Kathmandu Correspondent is seeking redress. We are here to broker the deal, subject to the usual agency fees (upgrades work!). If you don't believe the impact of a Carpetblog open letter to an airline, google AeroSvit. We hope you get your plane back. Call us!

For what it's worth, what I hear is that is was suspected a former Georgia Minister of Foreign Affairs, whom it seems the current government very much wanted to "speak with," was on that flight.

The "mistake" was in fact very much by design, though they may have been wrong about the former Foreign Minister, is seems.

I didn't even address the wild conspiracy theories in Georgia about this. Seriously, if Okashvilli was on that flight would they have landed at an airport with no radar? Would the plane have tried to take off again? There was also a rumor that it was full of Ukrainian special forces. The only people more ridiculous than Turks when it comes to conspiracy theories are former soviets. I'm not biting. If it was a Soviet airline, I'd buy. Turkish got its plane impounded for the effort.

Breaking news: After 12 years as a captain at THY, "wrong runway landing pilot" Mehmet Kesik has offered his resignation, unable to endure the withering scorn of Carpetblogger.