« Open Letter to Turkish Airlines | Main | Are you bored with Carpetblog? » 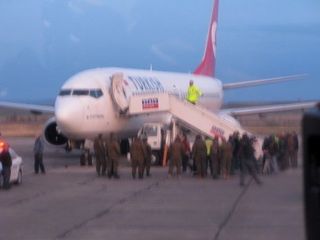 Thanks to astute, Turkish-reading Short Blonde Neighbor, the "wrong runway landing" pilot has resigned, ostensibly because of withering mockery from this blog. Our Turkish isn't that great but we're pretty sure we're credited in that story.

Also, according to the unimpeachably accurate Trend News, "Reasons of this landing were connected with the pilot's mistake. The evacuated passengers are interested in this case and intend to file a suit to compensate a moral damage."

Carpetblogger is still standing by to negotiate on behalf of the morally damaged Kathmandu Correspondent. We'll aim much, much higher than the five kupati she might otherwise deserve due to pre-existing damage.

As big fans as we are are post-Soviet conspiracy theories, we're not buying rumors that the plane was filled with Ukrainian special forces (CKC says the plane was half full, mostly of Israeli tourists) or the former interior minister, with whom the government wanted to consult. They totally would have used AeroSvit for that mission then promoted the pilot.

Posted at 09:12 AM in Caucasus, FSU, Mockery, Transport | Permalink

Did you see this? THY pilots in good company with Angolan ones!
http://www.todayszaman.com/tz-web/detaylar.do?load=detay&link=173483