Ask Carpetblogger: How Stupid Am I?

The current story about three Americans who have been "detained" by Iran while hiking in Kurdistan (aka Northern Iraq) near the poorly marked Iranian border reminded us of a conversation with a colleague last week at a party in Islamabad. In our line of work, where solid yet realistic security information is hard to come by or contradictory, it can be hard to assess which in-country activities are perfectly fine, which are risky and which are fucking stupid. It is often necessary to rely on one's best judgment. My colleague described her personal assessment system: "If something happens to me, are my friends going to mock me and say I deserved it?"

We rely on the same system! It's more effective at preventing you from doing stupid shit than listening to overprotective employer-funded security firms. It's crowd-sourced security! Using this system, we elected not to conduct field tests in random neighborhoods in Rawalpindi and came home safely, having suffered no mocking (for that particular activity, at least).

A variation on this conversation also occurred in Istanbul while our Greek journalist friend was held in solitary confinement in Iran on espionage charges for three weeks. Even though he was doing something important and fun (covering the Iranian election), how much sympathy did he deserve for getting into the jam in the first place? Some argued that, since he knew the risks going in, not much. (Iason, we'll let you know who we're not going to call first if we ever get kidnapped by the Taliban).

Because we live to serve, we've developed this informative graph that will help you decide if you should take the risk of your friends mocking you for doing something stupid in a shitty place. We worry, however, that we've given too much weight to the boring/interesting part of the Y axis, thus uncharacteristically diminishing the importance of the "how much money is at stake?" factor. 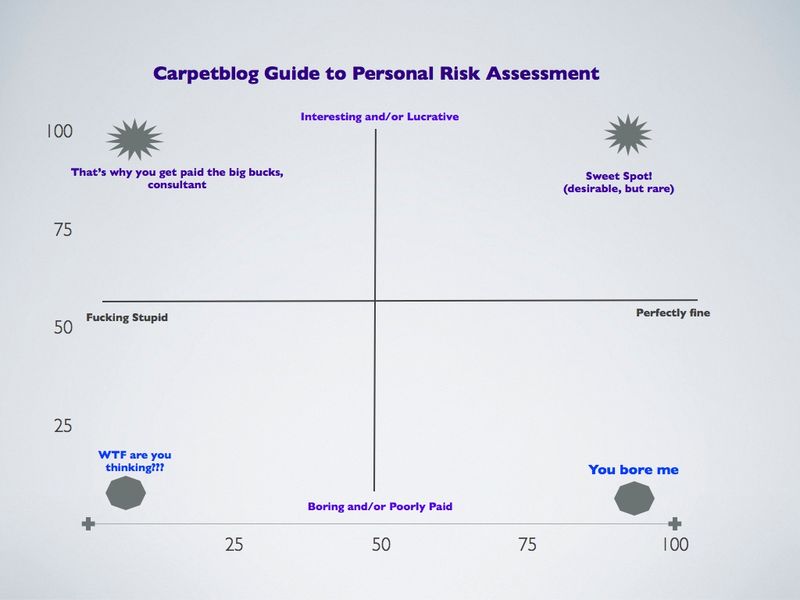 We rate the story about the hiking Americans as follows: Traveling to Northern Iraq barely merits a shrug. There are a few tourists and lots and lots of people work and move around freely in Erbil and Suleymaniye. For now, it's not unpredictably violent like Baghdad. But hiking anywhere near the Iranian border without a local guide, especially given the current environment? That's exactly the type of activity that would make your friends in Erbil accuse you of fucktardery, especially since it was an elective activity. Sneaking into North Korea on behalf of an online TV station no one watches? Unfathomingly retarded.

Sometimes, the system fails, as it did last year when a friend was killed in a Kabul suicide attack while working out at the Serena, a relatively low-risk activity at the time. When things like that happen, your friends will be silent for a minute, then make a similar calculation: "well, that would never happen to me because I would never do X, Y or Z."

Well, I would never work for the US Government.

Well, I would never stay in a hotel that's such an obvious target.

Well, I would never go the gym after work.

Sometimes, it's best to to sit in the bar.

Ok so wow after YEARS of reading your blog, I have finally managed to put a name and a face to it.

I never knew you were so highly connected as well!! Al Gore...wow.

You're Al Gore!? Colored me surprised.

1) That graph is incredible. I am definitely going to post it on the office corkboard for my field-visiting colleagues.

2) Your comment about Laura Ling and Euna Lee is a tad mean. Lots of people watch Vanguard Journalism, and some of its segments (like the one about Russian skinhead culture) have won prizes and lots of acclaim for being really, really good pieces of journalism about important topics that don't make headlines (the watery deaths of Somali boatpeople trying to reach Yemen, child prostitution in Oakland, CA, US support for Iraq-based Iranian Kurdish resistance groups, and so on). Ling and Lee weren't trying to sneak into North Korea either. They were in an area where the border isn't clearly marked, and, according to the accounts I have read, were there filming a story about trafficking of North Korean women. That's news, real news of value to human life, not the "did Obama ogle that girl's derriere? Our panel of analysts will discuss at five!" variety.

Nice point Transitionland, but I disagree. Even if they had got the story (they didn't), who would have seen it? If someone tells a story and no one watches, does it matter? By the Carpetblog calculation, if one is going to take substantial risks (futzing around in unmarked border areas around Iran or North Korea counts!) the payoff had better be pretty substantial, in terms fame (more than tens of hundreds of people watching) or fortune. Also, one might also want to have a Plan B so one doesn't disappear into the North Korean/Iranian gulags. While certainly hope The Big Dog might come save my sorry ass, I'm not gonna count on it.

Hmmm...but isn't that rationale (no one watches, the masses want fluff)what brought us non-stop coverage of Michael Jackson's death while so many stories that matter were and continue to be ignored?

Always a pleasure conversing with you, Mr. Gore.

Just like the tourist (aka greyhairs) we used to get in Alaska. They would hike around, quietly (like they would whisper) admiring the splendor of nature about them, suddenly coming upon a bear, scaring the shit out of said bear, and being mauled as a result (and thereby shutting down our favorite hiking area for months!) Fucking stupid!

I blawged about your blawg. It's not the first time I've done so.

VBlogger, since writing this post, I have discovered that this analytic framework helps refine decisionmaking in many different realms. "Are my friends going to mock me?" is a powerful deterrent to many different activities. Alternatively, it could mean I need different friends.

After spending years in police, courts and corrections, I do believe that people put their own lives at risk doing nothing of any large merit. People love taking risks and doing the adventuresome to the detriment of those who love them--unfortunately.

In defense of those who do put their lives on the line for a story or an experience that must be uncovered, I guess many things would still be unrevealed if no one ever took a chance.

Excellent chart, CB. It reminds me of something a friends once said, that the cause of all life's miseries can be explained in one or all of the following four ways:

1. It seemed like a good idea at the time;
2. The party got a little out of hand;
3. Everyone else was doing it;
4. Alcohol may have been a factor

I think 1 and 3 apply for working in Kabul. Perhaps 2 applies depending on your security contractor. But 4 doesnt factor into Kabul, and any other of the Crapistans for that matter.

Uh, KPIC, have you never been to Crapistan? Clearly you have have a very narrow - might I say wrong? -- definition.

Dear CB. I beg do differ. I live in a country of which at least one third was in the Holy Roman empire and one fourth was in the Austro-Hungarian experiment. While parts are crappy, other parts have potential. Is not the definition of Crapistan the same as Trashcanistan, that it has to be a place that already ends with a -stan anyway?