« Ask Carpetblogger: How Stupid Am I? | Main | Annus Horribilis Continues: May the Better Dog Rest in Peace »

*If by silent, we mean "drums and drum-set car alarms at 3am." This post is a total lie.

The first year in Turkey, it was a charming cultural tradition to be appreciated and embraced. The second year, it was an annoyance to be avoided. The third year, it has become a target for open hostility. 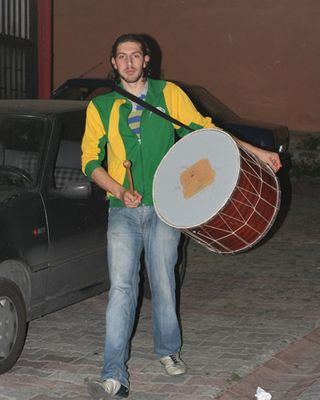 (Some day we'll do a post comparing and contrasting Ramazan in all the countries we've had the good fortune to visit during the Holy Month, particularly the Qat-fueled all night parties in Sana'a we saw last year. It's all fun for a couple of days. A month is too much).

Astute readers know that Ramazan, the Muslim holy month of daylight fasting which starts today, begins about two weeks earlier every year. This has practical implications for everyone, believers and infidels alike.

For example, it's much easier to fast in December when days are very short and cool than it is to fast in July and August, when days are very long and hot. Ramadan is going to be a summer holiday for the next few years. It also means that the drummers, an old Ottoman tradition in which guys with drums troll neighborhoods waking people pre-dawn for sahur (pre-dawn meal), start earlier and earlier. This year, drumming would probably start around 3 am. Every day. For 30 days. Also, it being August, people like to sleep with their windows open, even if their bedroom overlooks the Sokak. Our Sokak seems to be home to some heavy sleepers and drummers like to pay special attention to it. After a month of this, even the most ardent cultural relativist begins to fantasize about beebee guns and water balloons.

Recognizing that most people own modern conveniences such as "alarm clocks," that some drummers are opportunists who accept tips to not drum on certain streets and that some harass residents at the end of Ramazan for tips, some municipalities have banned drumming. We applaud those municipalities, but until now, ours has not been one of them.

As the Turkish Life has noted, "I'm just waiting for some mayor to say 'Globalization has given us McDonald's and TV dinners. You can easily eat throughout the year without killing a big cow at Kurban Bayramı. And if you want to show off to the neighbors, well, that's what fancy cars and iPhones are for.'"

But! TL has issued a late report that drumming in Beyoğlu has been banned this year. Despite heavy skepticism in Yabancı Köy about any ban not involving YouTube actually being observed in Turkey, it appears to be the case. No drumming last night! It may be a peaceful month after all, inşallah.

Paying people NOT to drum sounds like a dangerous precedent. More of the money for nothing attitude but worse. Where exactly would you draw the line? Paying people NOT to paint graffiti or paying people NOT to go through red lights?
I also did not hear any racket last night but, until you mentioned it, I hadn't noticed. And.. for the most part all that slaughtering business is out of sight, as well. That, to me, is far worse.

“Some drummers are opportunists who accept tips to not drum on certain streets” – Extortion is an excellent career choice, I dare say.

I am going to be in Istanbul in early September in Sultanahmet, so I expect I’m going to be kept up all night. I’ll try to take your initial attitude of appreciation of a charming cultural tradition, though I cannot guarantee ladylike behavior if I’m woken at 3AM.

Ramadan is definitely harder for Muslims in the summer and easier in the winter. But from the standpoint of a non-Muslim in Istanbul, I prefer summer, because you don't get the 4:00 traffic jams from millions of people trying to get from work to their homes in time for iftar.