Annus Horribilis Continues: May the Better Dog Rest in Peace

It is an indisputable fact that Whitney was always the Second Carpetdog. Mo, who died in January, visited a dog neurologist. Whit was lucky if she got wormed. Mo was a 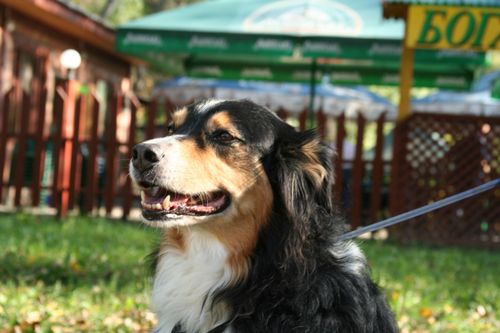 interactive, manipulative personality who overreacted to every real or imagined slight. Whitney was content to lie quietly under a table and have her ears scratched. Mo never met anyone who could throw a ball more times than he could bring it back. Whitney only put a ball in her mouth when she thought the novelty would draw someone's attention away from Mo for a few minutes. Mo sucked the air out of a room. Whit was referred to as the supermodel -- beautiful but a bit dim.

For ten years, every anti-social or irksome dog habit was blamed on her. The carpets were always covered in her hair. She was the one who barked her head off when someone came to the door. She shredded the mail. She woke up every morning at six asking to go out. Her insecurity was the reason we could never take dogs to an outdoor cafe or tie them up outside the supermarket while we shopped.

In early December, Mo began to spectacularly disintegrate. Within six weeks, he was gone. Simultaneously, in what at the we interpreted to be one of her most ineffective attention-getting gambits, Whitney's nose would, upon occasion, expel gallons of blood. Preoccupied as we were with the decline and fall of The Most Precious Dog, we did not pay as much attention to this as it might have merited. We feel bad about this. 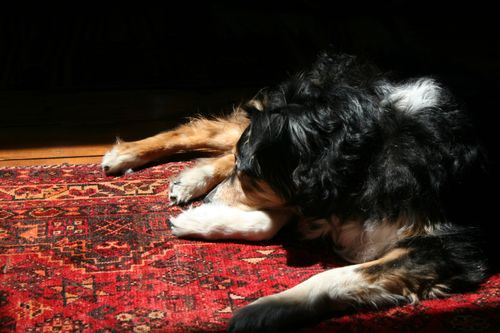 After Dr. Elif exhausted all diagnostic options (make no mistake, there is a wing named after us at the Anipoli Veterinary Clinic in Cihangir), she recommended we take Whitney to the Istanbul University Veterinary Hospital, under the suspicion that the bleeding and breathing problems were caused by a tumor in her snout. If you don't comprehend the depth of dread this recommendation inspired, you don't read this blog very often. Revisit some of our Azeri vet experiences.

We really should have posted at the time about the experience of hiring a dog taxi to take us halfway to Bulgaria for the surgery (it might not have been far, but anywhere we can't walk to is halfway to Bulgaria) on a gray, wet March day.  As always, Dr. Elif went far, far beyond the call of duty, setting up all the logistics ahead of time, ensuring that a slightly mental, barely literate yabancı could deliver a sick dog to the correct surgeon. (We know this is a digression, but it's a good story and it's not been told yet).

The vet hospital was neither new, nor shiny nor very technologically advanced, but it was clean and staffed by compassionate young students with whom Whitty trotted off to the surgery while we hyperventilated. Since the waiting facilities were sparse, we explored the stables (racehorses are treated there) and petted the giant Kangals (dun colored, black-pointed Turkish shepherds) that made up most of the clinic's incoming patients. Occasionally, a vet assistant came out to ask us to purchase more gauze or a different gauge needle from the on-site pharmacy (patients are responsible for providing all the necessary equipment for the surgery).

After several hours, Dr. Murat emerged from surgery proudly holding a gelatinous grey mass in his palm. It was just a small portion of the tumor he removed from her sinus cavity. It was so big he was unable to get all of it, he said, and he suspected it was Transitional Cell Carcinoma, one of the most common -- and untreatable -- cancers in dogs. He wrapped it in a paper towel, handed it over to a vet student and instructed us both to carry it over to the human part of the hospital to have it biopsied.

Dr. Murat's diagnosis was correct. He prescribed an anti-inflammatory that would mitigate, but not cure. He gave her a few months to live. 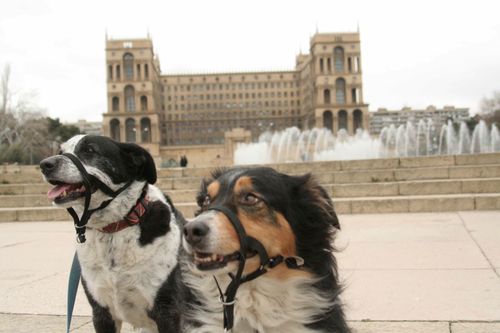 For five months Whit lived, despite everyone's predictions, quite comfortably with a giant tumor in her head. During this time, something funny happened. She emerged from her role as the quiet dog that no one ever paid any attention to become the dog about whom everyone said, "what a nice dog this is! Why didn't you tell us she was so sweet?"

We could take her to a cafe and she'd lie quietly beneath the table. There was hardly any hair on the carpets. We sometimes didn't notice if someone came to the front door. In fact, in a household that was often maligned by mailmen and meter readers for its decibel output, she was a silent, polite doorway greeter. Sometimes we got to sleep until 8:30 am. She seemed to smirk at us. We feel bad about this, too.

Last night, we came home from dinner with dear friends who, having known Whitty for almost half her life, offered toasts to her memory and made delicious food. But we opened the front door to silence. It was the worst silence we have ever heard.

Posted at 07:05 PM in Carpetdogs | Permalink

Such a loving tribute to two good, good dogs. So sorry for your loss.

We are poodle people and lost our old man P last year, and our sympathies are with you. Our new boy is poodlicious in an entirely different way and not only fills the gap but opens up a whole new field, mostly filled with badness but who would be without it? Dogless dog homes are a powerful vaccuum and we're sure karma will soon reward your kindness in some furry, drooling way.

It may be too soon for you to get a new dog but there are a sweet group of strays next to the hippodrome. There were eleven, but now it's down to four. I hope they are going to good homes. the mother is a sweet sweet angel of a dog, I visit her regularly. you can see them in my album at http://www.facebook.com/photo.php?pid=2993295&l=14618b6270&id=594422476. the restaurant next door would like to keep the brown one. I go down and see them everyday and I just hope they are going to good homes. I would take one but I will be leaving Istanbul soon and can't provide a stable home for them. I sure do love them though!

Oh I'm so sorry to hear this! Just heartbreaking. I cried reading your post. I hope you guys are doing OK.

Indeed, roaring silence. Do not feel bad. Dogs know when their people love them.

Oh you guys I am so sorry! This is just so unfair! I will fondly remember the time Whitney took off just before Kevin and went out for breakfast. He must have chased her up and down the street for 10 minutes. She thought it was the best game ever!

I'm sitting at my desk with tears welled up in my eyes right now. Whit was obviously dearly loved. My thoughts are with you.

Words, eh. Quite inadequate sometimes, especially when drunk as I am after another dogless day. I feel for you.

Sorry to hear about your dogs. I hope you all are staying above the flood plain at the moment, too.

I'm so, so sorry for your loss. I'll toast to Whitty this evening, and give my Albi (from Hungary) some extra loving.

I agree with the above poster, animals know when they're loved and yours are no exception. Somewhere they're lying in the sun together.

So sorry, it's a nice elegy for a wonderful dog I wish I had had the chance to meet. May she rest in peace in doggie heaven.

Crying Out Loud - you have my sympathies. Whitney - RIP.

I am so sorry. My first dog fell of our Baku flat balcony (5th floor, so was pretty dead) in the middle of the night and it took us a very long time to get over that. I can joke about it now- easy!- but then it was truly a nightmare. The only thing that healed me was getting another dog, I have to say. The flat was just too empty without one.

Just saw this. One dog in a year is bad enough. Two I can't imagine. So sorry for your loss. Gonna go hug our 3 canine numbnuts now.