It has come to our attention that blogs are better when one regularly posts things like odd anecdotes, bitchy commentary, ridiculous photos and gentle mockery. We used to do that a lot. We enjoyed it! We met lots of new friends. We annoyed some people. We made fun of people, often without their knowledge. It was fun!

We're fully aware that we've been a bit remiss lately. Let us explain. 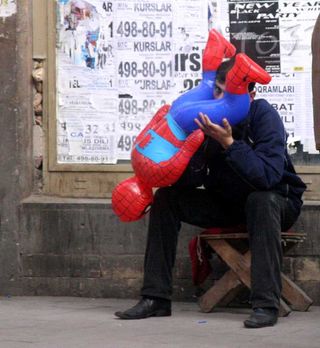 We started this blog just over four (five! we're bad at math!) years ago, when we lived in one of the most absurd countries on earth. We had so much raw material, it was hard to know what to do with it all. In the intervening years, we were unceremoniously kicked out of said country, moved on to one that was only slightly less absurd but had shorter skirts, lived through one career implosion then, finally, started all over with a new and different gig in yet another, marginally less absurd but more technologically advanced country. Over time, some of the rough edges of expat life got smoothed over, but other edges sharpened. We were cut, deeply. We had two dogs and they were good, but they died. After, there was a divorce. So there's that.

Hopefully, the bleeding has stopped. Please? After all this, we've been pondering, "is Carpetblog still relevant?" The answer, unfortunately, seems to be "no." Accordingly, we've decided to make this hiatus more or less permanent.

That's not to say Carpetblog won't be resurrected in the future. It may be, but probably in a different format, with a different name and a different angle. We haven't decided yet. Thoughts? Share them.

We feel bad about this. We know we have a loyal readership, made up of both dear friends and complete strangers. Much appreciated! But, if you miss Carpetblog that badly, the mysteries of the internets ensure that you can go back to your favorite posts forever, even every day if you're into that sort of thing. Keep your RSS or email subscription because announcements about Carpetblog II will appear here first.

Posted at 04:00 PM in All About Carpetblogger | Permalink

Oh, sigh, and not that long ago a friend recommended your blog to me as a kindred spirit...May I suggest, until Carpetbagger II, a dip in the Twitter pool? Less baggage there for you to carry, and some of us are trying to peak under those carpets ;)

Sad to see you go but wishing you the best. I've been following you for over 3 years - love your photos, your adventures, your take on life in your part of the world. Good luck and take care of yourself!

I will miss you! Cok Tesekular (sp).

So sad to hear that! Been a lurker for two years now... oh well, good luck and take care.
And yes; dip in the Twitter pool, please :)

Wha?!? I feel the need to drink heavily now... I've discussed so many of your topics with women aid workers all over (most recently in December in Serbia. Alcohol was involved), and recommended it to oh-so-many... If you start another blog with a different focus, pleeeeeeeeease don't delete the original Carpetblog -- there's too much fantastic info here to just go away (poof!). But most importantly, keep blogging *something* somewhere. Please?

You have had such a difficult year, I am so sorry. I hope a fresh start helps you. I am so sorry to hear of your divorce. Anytime you need a dose of ridiculous and feeling superior, please feel free to visit Kyiv! I'd love to dis the devushkas with you anytime.

What??? Your old buddies in California and elsewhere on the West Coast often raise and discuss issues you've posted on Carpetblog . . . sorry to see it going!

I'll miss you, but will continue to amuse myself with your wealth of back catalog of snark and insight. Good luck to you!

The bitching and mocking will be missed, but we all know you can't keep a good Carpetblogger down. Hang in there. Inspiring ridiculousness will surely rear its head again.

Argh. I am sorry for all your losses this year (furry and not as furry?) Thank you for the wonderful blog. I am not a world traveller and yet through your blog I got to feel as though my awareness of other cultures was expanded. It was always like reading a letter from a friend. Peace to you and best luck.

Too bad. I always enjoyed your posts, and couldn't wait for the next one. Hope you come back, regardless of name. If so, drop me a hint as to where I can find you. Good luck. Again, sad to see you go.

I will miss carpetblog mostly for the "fellating of superheroes" section. I learned so much.

Oh, this is a sad news, indeed. :( and the dogs, and the divorce...I read on someone else' blog that 2009 was a crap year, and it can piss off, as far as she was concerned. I totally agree. Sorry to hear you have decided not to blog here any longer. Hope that you will let us know where you will write though, because you do it very well, indeed.
stay in touch, please.

I'm throwing my 2 cents in as well, I was hoping I would have gotten to met you before I left Istanbul, but it was not to be. I will ABSOLUTELY miss this blog, seeing an update that there was a new post waiting at Carpetblogger always made me jump in anticipation. Here's hoping 2010 brings you better times and inspiration.

Why not get a new dog and start over?

Wow. 2009 has been a bad year for so many people. I'm sorry about the dogs and the divorce. Are you still in Istanbul? Maybe you can manage short caustic comment on Twitter? Keep writing and let us know where.

2009 was a shit year for us too, so we feel your pain. Sorry to hear about the parting of ways. But do not let them obscure the fact that your writing clearly rocks and the world as a whole is a crappier place without it, so please don't stay away too long. Relevance is overrated. Art does not apologize!
Your voice is greatly appreciated, even by homely homebodies such as ourselves. Thanks for everything thus far. Smell the roses but do come back.

Cheers. Good Health and Happiness. From all of us. Do not feel bad, for you have important things to do. I am sure you will find more caustic commentary for the future CB II, and we'll be waiting for it.

please don't delete the old carpetblog. good luck, I send you my best wishes. diego, from argentina, one absurd country too.

Will miss it, keep on trucking.

Well I guess perhaps we felt it coming, time to shed the carpetbaggage and start a new era… over the years we've always enjoyed keeping up with you here. Thanks for sharing the laughs, the intriguing insights and truly bizarre situations that tend to be daily life has an expat. Hope the coming year is much, much better than the last, all the best… p&j

I am profoundly sorry to hear of your divorce, the loss of the carpetdogs was hard enough. I pray you find the peace necessary to find a new life, with happiness.

It is ironic that I counted your blog as one of my key information gathering references, I sought out real-world descriptions of expat life in Azerbaijan, my wife and I are moving to Ganja (Azerbaijan) in a couple of months. On purpose even. Your writings, while greatly amusing and at times disturbing, proved to be a wealth of information. It will be missed.

May your life be better than you ever knew it before, I look forward to Carpetblog II.

Best of luck and I'm sure you'll bounce back if you have half the verve and cleverness of your writing. I'll miss reading Carpetblog and I echo everyone who is waiting anxiously for the sequel.

My blog post on Carpetblog's departure (how meta) is here: http://friejose.wordpress.com/2010/01/13/good-night-sweet-carpetblog/

Gecmis olsun Carpetblogger. V. sorry to hear of the permanent hiatus... stopped by to see if I could feature a Carpetblogger post in my inaugural issue of expat+HAREM's IST2010 blog carnival. Holding out hope for CBII.

After rediscovering the carpet blog after many travels to ridiculous places myself, I am very sad to see it go :( :( the laughter.. the tears.. mostly the laughter..

I've always enjoyed your blog and so glad we met up in Taksim several years ago. Your writing style always gave me something to admire and laugh and for this, I thank you so much.

I, too, have not posted on my blog since I returned to the states, but I have a large Turkish group here to commune with along with the ATA-NC and Divan Cultural Center, all in Cary.

Soon, I'll be blogging about Istanbul Twestival, and I hope you'll rally with us to raise funds for a charitable cause in Turkey.

I wish you the very best and know your spirits will rally even better very quickly!

I still want Carpetblog: the Book