Are you a writer visiting Istanbul for the first time, or the eleventy-millionth? Do you like giving your readers a sense of place that you manufactured after 31 hours on the ground? Do you want to nail the mysteries of a 7000 year old city in a country with 75 million people in 500 words or less? Then this guide is indispensable. Read carefully and chose your cliche wisely. Whatever you do, do not look at this link.

Mini Skirts and Minarets: Istanbul has both! What an amazing contrast! Very little more needs to be said. If you manage to get this alliterative classic in your lede or headline, you are champion. 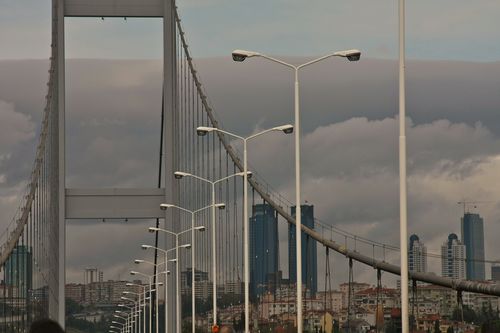 Move to the front of the line.

Bridge Between East and West: Did you know Istanbul straddles two continents, and there are some  bridges? It should be news to everyone who has never looked at a map. This is a powerful metaphor and it cannot be overused. Every article should reinforce it because it absolves you of any further responsibility for explaining why it is important or how it is playing out today, giving you more time for you to try.....

Apple Tea: Did you sip a mixture of delicious hot chemicals while admiring Turkish carpets lovingly handcrafted in Pakistani factories? Tell us more about this Turkish classic that can only be found in Sultanahmet.

Turkey Is Looking East. There may be some people who have missed this critical message, which, by decree of the Ministry of Drop-In Journalism, must appear in every article written since the Gaza Flotilla Incident.

X Incident Will Affect Turkey's EU Accession Hopes in Y Way: Show your sophisticated knowledge of Euroaffairs by viewing every policy or political decision made by Turkey through the prism of its hopes of joining the EU. Of course Turkey's highest aspiration, with an economy that was second only to China's in first quarter expansion (be sure to click through to read some awesomeness in the headline and lede!), should be to help prop up third world economies and political systems like Greece's, Bulgaria's and Romania's.

In your defense, you say, "Carpetblogger! But aren't bridges between continents and minarets and girls in headscarves walking arm in arm with other girls in miniskirts powerful visual images you can see every day in Istanbul that tell us a lot about The Way We Live Now? These are important and should appear on my blog, which is read by tens of people! Why do you have to be so cynical about everything? And anyway, this is what editors want because they are lazy and lack imagination!"

We are, as a matter of policy, favorably disposed to giving those in a position to allocate funds whatever they want, when they want it, no matter how lazy or unimaginative. And, our resistance to common visuals associated with Istanbul may suggest that we have become inured to lovely images that can be compelling to people who don't look at them every single day. We will keep an open mind about this suggestion. The accusation of cynicism stands undisputed.

However, this topic generated some debate at the recent Foundry Photojournalism Workshop we attended. A presentation of a series entitled "Liberal and Conservative in Istanbul," commissioned by a German news magazine and shot by a well-known photojournalist, evoked negative reactions from some who live here for its cliched images and for completely missing the story. Were we the only ones who noticed? Did those who live elsewhere find it more appealing? Was the photographer simply presenting the audience with images that confirmed its preconceptions (it was for the Germans, after all, who have their own ways of thinking about Turkey), at the expense of "reality?" These are all important questions. We don't know the answer!

And! There are lots of photographers and writers covering Turkey whose work we respect because they get past the cliches. We are happy to share those links. But, we can probably get another post out of it and don't give that sort of publicity away for free so it will have to wait.

I used the bridge as the operative metaphor in a powerpoint for a couple job interviews recently . I worked, even without the apple tea. I'm glad I didn't go with something like "the world is flat".

And #1 would be sooo easy to vary too:

High heels and hijab! (Sometimes on the same gal)
Mosques and McDonalds!
Prada and prayer beads!
Muslims and metalheads!
Efes and ezan!

Can we make a drinking game out of this one?

The most common Istanbul (and Turkey) cliche is people who live there several years and pretend to be an expert of the city/country without being able to learn even the language and of course without reading a book in Turkish!..

What a wonderful post! This made me laugh a lot. I would submit, as well, the need to relate at least one of the stories trotted out by tour guides, like about the altin/alti minarets on the Blue Mosque or whatever. Is it true? Who cares! So exotic.

As a Turk who has lived the major part of his half a century life in Istanbul, I have never met a friend, colleague or relative who buys Apple Tea to drink at home. I think Apple Tea is meant for foreign tourists as a "must" of Turkey; I congratulate my fellow businessmen for being this creative...

We have an artist residency in Karakoy, and we have a black list of project subjects we will not accept: headscarves, bridges between east and west, romantic photographs of workers in their shops, transvestites on Tarlabaşı, and a couple more. . . (even though these are the things which bring in the EU money!)

How about "caustic commentary from Constantinople"?

Apple tea seems to be a distant relative of the old "Oralet" (some people still call it that), which was basically hot tang. The old motto on their commercials was, "Oralet, elbet!" It's amazing how the apple tea has caught on. Actually it, and the equally dubious "kuşburnu" variety are sometimes offered in the kiraathanes and drunk by people who don't want a 40th glass of black tea that's sat since morning. The kiwi version is absolutely frightening. But my favorite ever variety/brand was "Lemon Lezzo." A special tonic sure to pep up the fatigued lesbians in your life!

One that burns my butt is the way the Economist keeps referring to AKP as 'mildly Islamic'. Fer crissake, there's a bloody cultural war going on there, has been since the 90s at least. Mildly? Why is it eveyone I know who still lives in Istanbul disagrees with this entirely?