Some people come to foreign cities like Kabul to experience a different way of life, to gain a deeper appreciation of another culture and its history. We don't know many of those people. Most people we know come to places like Kabul for completely different reasons.

Also, the lessons that stick are usually the ones that come at the greatest cost. This is so very true.

"Carpetblogger! How do you know all this?" We know this because we have recently learned and grown. I KNOW! SHUT UP!

We have learned that you should not try to buy booze in Kabul. It is a costly fool's errand.

Did you know that if you try to smuggle booze in to Afghanistan, which is an Islamic Republic, via the airport and get caught they might keep a bottle as a "tax" or sell your bottles back to you? So, don't try to do that. It might offend someone. Alternatively, be smarter than your average Taliban and store your stash in nalgene bottles.

Sadly, though, it is logistically difficult to smuggle in a six week supply. Alternatives must be sought.

Over the last month, we have spent $60 on a bottle of "Absolute" and $60 on a bottle of "Italian wine." If you're without a calculator close by, that's $120 on undrinkable booze. (If you have to ask why anyone would spend that much money on any bottle of liquor for any reason, you clearly have never lived on a compound or tried to manage anything in a war zone).

The red wine was an impulse buy at the Russian/Italian restaurant "Boccacio" (emphasis on the Russian). Walking out the front door after a gloppy pasta lunch, we eyeballed a full wine rack.

Suddenly, we were back in Ukraine.

"Devushkaaaa! Can I buy one of those bottles to go?"

"Are you sure?" She turns to the Russian manager.

We carried that bottle around for three weeks, waiting for the optimal combination of high quality companions who also had a wine opener (total consultant fail: not carrying a wine opener in one's suitcase). In darker hours, we had whacked away at the cork with a knife and, later, our teeth, to no avail.

Last night, finally, 50% of conditions were met, when Scrappy the War Correspaniel and that guy Jason showed up at our hotel room with an opener in hand. 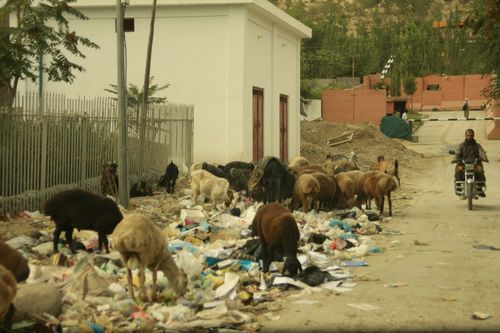 We poured out two glasses and a nalgene chalice. Profound disappointment ensued.  "Funny, the label  doesn't mention anything about it being sparkling." No matter how long we let it breathe, the situation didn't improve. Clearly, that wine had traveled from Peshawar on the back of a mule next to some RPGs in the middle of August.

The bottle of "Absolute" arrived via our media department. Generally, we count on media departments to be reliable sources of things like booze so we didn't ask key follow-up questions like, "where are you getting this stuff?" We obediently handed over $60. Big mistake! The bottle arrived in a plastic bag with a cap held on with packing tape. The inside bottom of the bottle was crusted with dirt and chunks of crud-- chunks of crud that were not yet suspended in the still-unidentified clear liquid. We are still awaiting restitution.

We've heard it's impossible to fake a beer can, so maybe we'll stick to Heieneken.