Ask Carpetblogger: How do I Buy a Carpet in Istanbul?

*Obviously, this advice is targeted at the casual carpetbuyer. Of course, if you know something about carpets and you are wealthy, you know where to go.  There are plenty of reputable dealers in Istanbul who carry lovely and very expensive antique and new pieces. We're talking to people who visit Istanbul, who are not rich, don't know much about carpets and want a nice souvenir of their visit.

I want to buy a carpet when I visit Istanbul and don't want to get ripped off. Help meeeee.

OK, do it if you must, but there are some things to keep in mind.

You need to know what you're not buying. Very, very little that you will see in the Eighth Circle of Hell (known locally as the Grand Bazaar) is actually made in Turkey (the same goes for practically everything else in the GB). Labor is simply too expensive here to mass produce cheap carpets and kilims, so most of them come from Pakistan (nearly all cheap carpets are Baloch), Iran and, it may surprise you, China.

A dealer in Islamabad recently explained this China angle to us and a Turkish kilim designer confirmed it.  The only thing Turkish about those carpets are the design. The wool comes from New Zealand or Australia and the dyes are probably some combination of melamine and spit. Apparently they are made in huge factories on looms lined up side-by-side with a foreman who calls out rhythmic weaving instructions, like the master on a slave ship (that is the analogy he used!). We would like to go to China to see this.

Mossmaniac and Carpetblogger spent the better part of the last two days in the Grand Bazaar (Carpet College!), in the belly of the beast as it were, trying to understand where all this crap comes from and how to identify it. We were lucky to find a dealer who was so clueless about his own stock and our poorly concealed mocking of it to not notice we were only looking at it so we could understand the nature of the odd colors and strange patterns that don't typically appear in Anatolian weaving and scritchy textures that feel like astroturf. China!

The rest of his stuff was cheap crap that's produced by the ton in Pakistan, with which we have more than a passing familiarity. That information had to be drug out of him. This experience discouraged us and made us hate the Grand Bazaar more than usual. Ask if the carpet you like is made in Pakistan or China or Iran. If you like it, you shoudn't care. But!

How can I tell if a carpetseller is lying? His lips are moving.

Do you have a dealer in Istanbul you recomnend? No.* Contrary to everything written above, it is possible to find older genuinely Turkish carpets or kilims in the greater Grand Bazaar area, if that's your bag. We suggest finding an older guy sitting in his shop drinking tea (most young touts have no idea what they're selling) and ask him to show you "something special." He'll take you into a back room, or open up a cupboard and you will feel like you found the Holy Grail. Your heart will beat faster, and you will feel faint. You will feel that the last six hours of hazing -- of listening to some maganda tell you that if the fringe is braided, it means a virigin wove the carpet and that cremesicle orange is a natural dye --  were simply the price of admission to carpet heaven. You will believe again in the zen of harmonious colors, tribal patterns and handspun wool.

Then the guy tells you that beautiful 70 year old yahyali is $6000 and you will laugh. You will say, "I heart Pakistan." 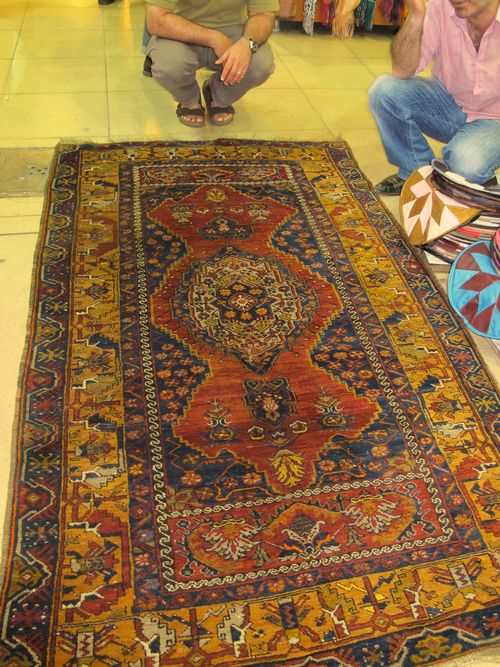 *But a Carpetblog recommendation be bought. Have you met us?

This is why Carpetblogger does not carpetshop in Istanbul. Cheap carpets are crappy and nice carpets are stupid expensive. We prefer to buy both in Islamabad these days.

"But Carpetblogger!" you plea, "I want to buy a carpet in Istanbul, not Islamabad." Ok, fine. What do we know about you and your taste? Don't listen to us. Do it. Buy something you like that reminds you of your nice visit here and makes you happy when you look at it on your bedroom floor. Don't believe one word you're told about its origin or quality, unless you're told "it was made by a Chinese slave in Guangzhou using spit and melamine dye," because that would be awesome and probably true. Don't pay a lot of money for it and bargain like, uh, a person who doesn't like to be ripped off by skeezy carpetdealers in the Grand Bazaar (you probably won't get better than 20% off, though). Be happy with your new carpetfriend and don't worry that you got ripped off because you totally did.

Coming soon! The Metaphysics of Textile Purchases: A Carpetblog Manifesto.

MoMA, you might have heard, is selling a line of "lifestyle design" products called "Destination: Istanbul" that have been inspired by Istanbul's streets. That Carpetblogger was not asked to contribute to the project seems like an oversight, but not having been asked for our input on something has never stopped us from providing it.

Here are some different lifestyle products, broadly defined, inspired by our own experiences on Istanbul's streets.

Concrete Box Incubator: Walk down any Istanbul street and you will conclude, as we have, that Turks are artists in the medium of concrete (holy crap, we worry we're mixing up concrete and cement somehow and our ancestor is going to post a harshly worded rebuke). If they're not creating concrete boxes, they are using drills to force the concrete to comply with their artistic vision or jackhammers to destroy them, in place of which will grow another concrete box. Kit includes concrete, drills and jackhammers, so you can grow your own box, drill some holes in it, then destroy it and create a new one. Which, you know, circle of life.

Cat Pee Diffuser: Bring the summertime aroma of Istanbul's street into your home with our unique cat pee diffuser. Comes in concrete only, cat pee not included.

Anne Amplifier: Every Turkish male loves his mother so very, very much. In fact, the Turkish male child playing in the sokak frequently demands the attention of his mother five stories above by shrieking "ann-EEEEE," rather than, you know, ringing the bell (indeed, we have heard adult males call to their mothers from the street using the same shriek, perfected as a five year old). This Anne Amplifier captures the aural essence of the Call/Response of the Palaska Sokak Cow Kız and her inbred offspring, Rufat: "ann-EEEEE" "RUUUUU-faaat!"

Front Door Electrifier: Maybe eau de cat pee isn't your bag and you become annoyed when it follows you in from the Istanbul Street every time you open your metal front door, which has been used as target practice by every tom in the neighborhood. This unique product combines the conductive powers of liquid and steel into a practical and entertaining cat repellent.

Maganda Hat Pin: This product may already exist, actually. It's the perfect accessory for the Unaccompanied Lady who finds herself forced to walk on Istiklal.  Feel the unsolicited yet familiar grope aimed at your private parts? Fight back against Magandas with a quick stick with your hat pin. Who cares if you get the wrong guy? He probably deserved it for something else.

These are all limited edition products -- çok elitny -- so place your orders soon. They all receive the Carpetblog seal of approval.

We are easily distracted by shiny things. And hats. And shoes. The presence of all these things in one media event is enough to throw off our schedule for days.  We are not ashamed of this!

Anyway, here are our Top Five Favorite Media Spectacles, Ever. We remember these as much for where we were and with whom we shared bitchy commentary as what actually happened.

1. First OJ Simpson Trial, Los Angeles, 1995. The sine qua non of media events, never to be surpassed. Carpetblogger Trivia: Did you know we were called to be a juror in the second, civil trial? Surprisingly, we were not selected even though we were extremely well-informed about the case. Where is Marcia Clark these days, anyway?

2. Royal Wedding, Istanbul, April, 2011. Nenand's rant about the National Primate of England wearing a Day's Inn bedspread and failing to pluck will be preserved in our skype history forever. And shut up, haters. This is why we love royal weddings.

4. OJ Low Speed Chase, June, 1994 in a Red Roof Inn in Hartford, CT. Got our catty on with James Grant Goldin using a landline while watching a television.

5. Dramatic Reading of The Starr Report, September 11, 1998 (Whoa. Did you know that?) Portland, OR. Pushing the bounds of office decorum since the mid-90's.

God, we loved the '90s. And to think we didn't even have blogs or skype or twitter in those days. Can we have them back, please?