Carpetblog Weighs in: Georgian Food in Istanbul at Cafe Euro

You've heard the old saying about dining in Istanbul -- "There's all kinds of cuisine here as long as it's Turkish." Perhaps you've argued that Istanbul is the biggest city in the world without a real Pakistani restaurant. People come to Istanbul for a lot of reasons -- many of them good -- but not for its selection of international food.

So, when we read a FB post by the writer of the lovely Delicious Istanbul blog about Cafe Euro's Georgian food, we got our hopes up, just a little. She appears to be of some FSU provenance -- not sure which, don't want to offend! -- so we viewed her as credible. And, that the restaurant is located in Aksaray -- which is known locally as Devushkastan --suggested that there is a built-in clientele who knows their satsivi from their tkemali.

Georgians are sort of like Soviet Mexicans. They moved around and set up restaurants all over the Soviet Union to serve their hungry workers needing a taste of home. Every FSU resident we've ever met craves the occasional Georgian meal, even if they've never been to Tbilisi. Georgian food, like Georgia, is unlike anything found anywhere else in the world. We have long moaned about the lack of the real thing in Istanbul. Georgia is so close! Why can't you get a Borjomi and a decent khingali here?

After reading DI's post, we put on our devushka boots and gathered up the famous but also charming Rutherford/Tomasetti Partners and plotted a route into the dark heart of Aksaray. Did you know there is a giant bus station right there in the middle of it that serves exclusively the Caucasus, Russia, Romania and Moldova? We had no idea. There must be a lot of workers coming to Turkey from those countries! What sort of work they do here do you think? Globalization is awesome. 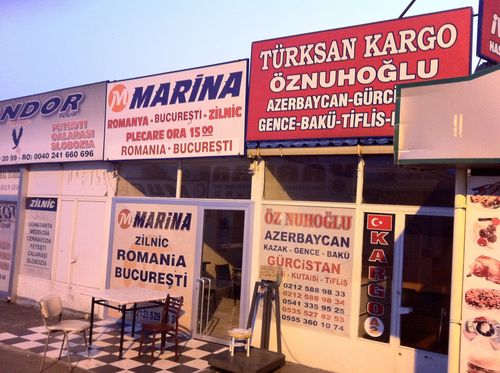 And there it was, Cafe Euro, with Georgia's UFO-script and photos of khingali on the outside walls, conferring a legitimacy that could not be faked. We were so excited. We stepped down into its dark bowels and felt like we had stepped into a bus station in Batumi. Cheap cafe decor in Turkey is white molded plastic chairs. In Georgia, and Cafe Euro, it's rickety metal-backed chairs with pleather seats. It's also bleached hair, cigarettes and drunken dancing to Russian pop at 7 pm. We were home.

We have found that the only time we can speak Turkish is when we want to speak another language in which we know 50 words, like Russian. The waitress, who was Georgian, got excited by our efforts and, in violation of traditional food service norms in her homeland, became super friendly and helpful. Sadly, 7 pm is not the hour to go if you want lobio or khinghali. The only things available were khachapuri (yay!) and kebab (less yay). We speculate that if you want access to the full menu (keeping in mind there is no menu), you need to come when the buses are arriving or departing. 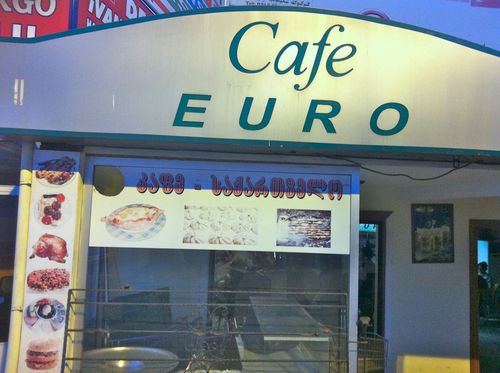 We ordered up some Adjarian (the kind with an egg, and not our favorite, but it will do if a Minghrelian is not available). It was fine but we really wanted khingali, particularly since we had talked it up to the RT Partners, who had never had Georgian before. And there was Efes, not Kazbegi. A real Russian speaker might have been able to rustle up some homemade wine or even some chacha, according to Istanbul Eats (which, consume at your own risk).

Our review: Hopes still high, we're going to go back at a different time. Georgian in Istanbul deserves all the support we can give it.

Cafe Euro is at the entrance to the heretofore unknown to Carpetblog giant bus station in Aksaray, on Kucuk Langa Cad.

Yours is an absolutely best blog I have ever, ever read, and am now eagerly reading all your older post....

So intelligent, poisonous and refreshing.

Myself now, snoozing with an invalided kitten in Croatia ( another mad country), but I have also lived in Middle East ( addicted to it, sorry...) for a very loong time...Of course, I also share the crippling and dangerous love for the kilims and carpets, though in my seaside apartment, I have but one average, average kaskhai, and hand-embroidered Kashmere one...( was poor at the moment of purchase)

I send you love and sincere wish that you have many, many more wild nights and days in your wonderful oddisey, inshaallah

Thanks for the kind words Ana!