While in Tbilisi for the annual post-Soviet Thanksgiving bacchanalia, we ran across something in a friend's apartment building that we have never seen before: a pay elevator. 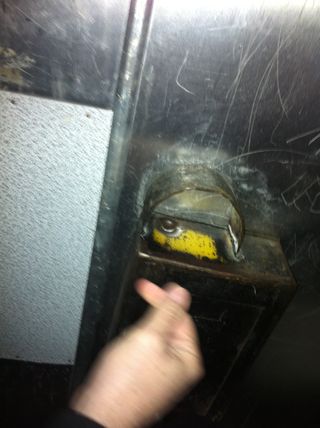 We are the first to admit that, as a resident of a fourth-floor walk up, we have elevator envy. Envy became self-loathing as we carried 50 lbs of Georgian wine and pork up those stairs last night. We're always in the market for new ideas when it comes to mechanical ascension techniques.

The pay elevator, however, has some pros and cons. Borko, ever the Reagan-era free-marketeer, praised it as a market-oriented solution to the vexing problem of elevator maintenance in buildings where no one is obligated to pay for upkeep of common areas. We agree!

However, this elevator charged 1 Tetri (about one penny) per ride. We're not very good at math, but if a six-floor building has 2-3 apartments on each floor, we're not convinced the economics of the idea work out. We also failed Reagan-era economics so maybe we're missing something.

Furthermore, nothing about the elevator suggested that its upkeep was anyone's priority. Maybe the proceeds from the box funded the upkeep of the elevator repairer's vodka supply.

Perhaps a pay box in the elevator acts as a potential barrier to entry to never-do-wells. But who is more likely to carry around a pocketful of 1 Tetri coins? A never-do-well or Carpetblogger? We would probably walk up four flights of stairs just as often as we do without any elevator at all, if using it was contingent on having a 1 Tetri coin in our pocket.

So, the debate on the pay elevator has yet to be settled. But when we saw it, we said, "finally, we're home." Gone from the FSU for too long.