Frankly, it's not that hard to obtain the Carpetblog stamp of approval. We're not out to diminish our own brand or anything, but really, with a few exceptions taken on moral grounds, we'll shill for almost all of our friends.

ave in the past shilled for Istanbul Eats, not just out of affection for its founders, but because it is the best guide to eating in this city. We use it all the time (IE recs got us to try current faves Datli Maya and Mohti) and recommend it to everyone.

We have also always recommended IE's culinary walking tours, even though we had never taken one, or, until very recently, known anyone who had. That's how important our credibility is.

But after dear friends visiting from San Francisco last month raved about the tour and promptly signed up to do a second one, we thought maybe we had been missing out on something important and fun. In fact, we were more than a little embarassed when walking around town with them, sharing all our greatest insights about the mysteries of the city such as the difference between dana and koyun işkembe, they said, "oh yes, our guide Angelis already told us that."

So when Carpetblog's Kosovo Korrespondent suggested we do a Festivus Day tour, led by that Greek Angelis Nannos who really made us look bad to our guests, we said, "well, ok."

Have you ever visited your friend in Istanbul and noticed that she doesn't really know anything about the city and seems to be making shit up, or takes you to the places closest to her apartment? Well, Angelis isn't like that. He's your cool friend in Istanbul who really does know good places in unlikely neighborhoods and loves to show them to you with great enthusiasm. Who knows? Maybe he can be your new friend in Istanbul. Other people seem to like him.

Would you travel across town for a doner? We sure as hell wouldn't, not before visting a hole-in-the-wall döner place in the back streets Küçükpazar (you don't even know where that is, do you?), wher 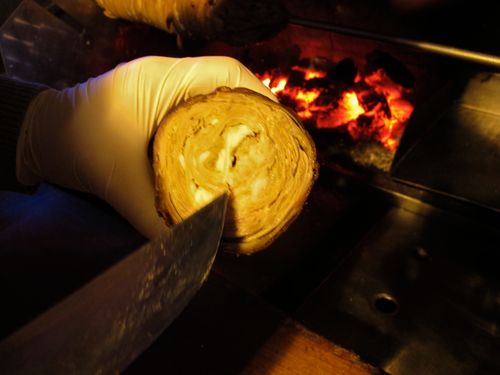 e the dönerci marinates real lamb meat in onion juice overnight and alternates layers of meat and vegetables. Do you think a pide is just beyaz peynir and sucuk toasted on some dough? Try adding Black Sea magic village butter to the crust at a place in Fatıh that, to some skepticism, claims to be the first Pideci in Istanbul. Do you think Turkish Delight is gross? Well it is, but you might find some that's at least not made of rubber in the back streets of Eminönü. Have you tried kokoreç? After five years in Istanbul, we finally did and it's not as bad as we expected. That white matter at the tip of the knife in the photo? Suet. Yum.

This is just a long way of saying that Carpetblog stands by our endorsement of Istanbul Eats' Culinary Walking Tours and has forgiven Angelis for making us look dumb to our visitors. Also, we know from reliable sources that IE's Meghan gives excellent tours as well, even though we haven't been on hers.

And, as long as we're sharing love, we haven't shilled for Istanbul Personal Shopper in a long time. Like IE's food tours, Kathy takes visitors to parts of the Grand Bazaar people who have lived here for years don't know about. The best part? Your visitors will love the tour and you won't have to go to the Grand Bazaar. Everyone wins!

If we were in the FSU, we would pull out our stamp and stamp our approval on both.