Carpetblogger recently had the good fortune to spend a few days in rural England with our friends Oliver and Henry. Oliver and Henry live in a village of 300 people called Farthinghoe, which is not far from Hinton-in-the-Hedges. Their stone cottage, which was built around 1635, is called 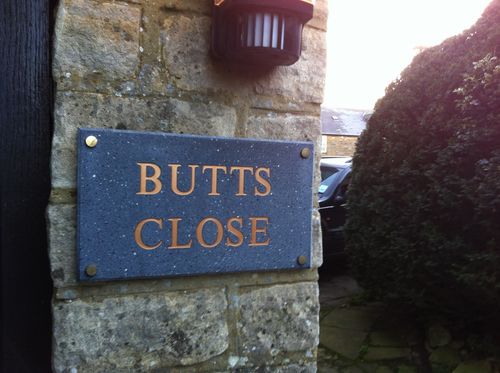 Butts Close (insert obligatory giggle).  It is next door to Folly Cottage, a name we are going to appropriate for our own apartment.

Oliver and Henry love to foxhunt. Henry’s a barrister so it’s best to avoid a debate with him over the legal nuances of the sport. Brushes are scattered throughout the house and its décor could be described as hunt-chic. Many wine-fueled dinners in Istanbul with Oliver and Henry have concluded with show tunes and a commitment on our part go hunting with them.

It’s a little known fact that a substantial portion of Carpetblogger’s youth was devoted to the study of horsemanship as practiced in rural England, including the arcane practices of its foxhunts, via the British-founded Pony Club. In hindsight, this seems like an odd way to spend one’s teenage years, on par, in terms of context, structure and future usefulness for the average rural American with memorizing the Koran in a madrassah.

Perhaps devoting that time to learning math might have been a more productive use of scarce mental resources. That we can still tie a stock tie correctly (left over right, right over left then crossed) but not make change should be a burden carried by those responsible for our education.

Country social life revolves around the hunt. Accordingly, we ended up at a delightful dinner party in Hinton-in-the-Hedges, in a former parsonage with an underground passage that leads to the village church in one direction and, in the other, to the pub. The hosts and guests included members of the Bicester hunt, their teenaged daughters and the 70-ish year-old hunt announcer. Once we established our credentials as a “B-rated” Pony Clubber* who hunted in the mid-80s with Woodbrook Hunt Club, at Fort Lewis in Tacoma, Washington, our place at the table seemed secure.

Aside from being cold, wet and muddy, the Bicester Hunt, which flows over the ditches and hedges of South Northamptonshire, has little in common with the Woodbrook Hunt, which ducks low-flying C-17s landing at McChord AFB. Still, horse-crazy 17 year old girls are the same everywhere. They like to ride fast over big fences without the respect for their physical integrity they will develop by the time they reach 43. Our lack of respect for our physical integrity at age 17 resulted, the last time we hunted, in a mud-covered visit to the Madigan Army Hospital emergency room. For us, calling up Pony Club-era esoterica from the depths of our DNA (so thorough is the indoctrination, that’s where it is stored) at a dinner party at Hinton-in-the-Hedges was absolutely delightful.

We did feel the need to lecture Oliver on Saturday morning as he prepared for the day’s meet by selecting his flask. “A saddle flask is better because you could break a rib if you fall with one in your jacket,” he explained, while brushing dust off the felt bowler hat Henry planned to wear hunting that day. That simply wouldn’t fly at Valley Green Pony Club (the bowler part. The flask-related safety insight and the dusting would have been embraced).

With an appropriate mount having been sourced, our visit concluded with an even firmer commitment to go hunting, possibly even before this season ends. We’ll to have to find boots, breeches, a jacket, a helmet and some muscles (also, possibly, some balls), before then, however.

Book a room at the Folly Cottage and alert the local equivalent of the Madigan Army Hospital. Carpetblogger's going hunting.

*We googled that and would have linked, but clearly the USPC rating system been dumbed down for the current, softer generation.

Posted at 07:27 PM in Adventure, All About Carpetblogger | Permalink