« A New Carpetblog Feature! Ask An Expat | Main | Do You Heart Carpetblog? »

Ask Carpetblogger: Should I bring Turkish wine to a party?

First question! It's a very important one. 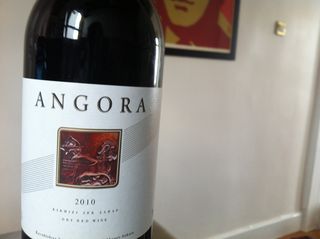 This is possibly the most vexing etiquette dilemma facing party-goers in Istanbul today. Since Istanbul Eats has slogged into the Turkish wine debate with a new column that should be called OK, This One's Not That Bad, your question is more timely than ever.  It's wise to seek guidance.

Carpetblogger has long held that Turkish wine is the best of the Black Sea region, if you don't count Georgian and Bulgarian, and, some have argued -- but we don't necessarily agree -- Moldovan. We also believe that, while Muslims excel in many things, including hair removal and cooking meat on a stick, making liquor is not one of them.

Even we are willing to admit that Turkish wine is better than it used to be. It is possible to find a reasonably priced bottle that won't make you sick (if you do find one, buy it by the case). Some people may vociferously object to the following advice, but we here at Ask Carpetblogger are pragmatists and sympathize with the poor prole drinker. The short answer, is "sure, go ahead, bring Turkish wine but proceed with caution."

Before you go and say "Carpetblogger, why are you such a fucking snob?" (uh, why water is wet?), let us be clear that we do not discriminate against cheap wine. We LOVE cheap wine. We just hate shitty wine in general and expensive shitty wine in particular. Maybe someday Turkish wine will be as good as Greek wine and we'll have to find a new target.

In the meantime, if you're invited to a sangria or mulled wine party chez Carpetblogger you know that there's an oversupply of Angora, Buzbağ and Deluca. The next day will be rough. We call it payback.

I have no idea where to begin with this article other than it infuriates me. We are one of many wine conferences being held in Turkey this year because of the blossoming quality wine being produced and to say that people should stick to import is ludicrous. If you want to be helpful to your audience, why not encourage them to explore local wines that you enjoy? Why not help them to fall in love with local grapes, local vitners and local terroir? To encourage them to make mulled wine from Turkish wine because you feel it's crap doesn't help anyone. It prevents people from exploring, from discovering and from supporting the local economy.

What's to be infuriated about?

When Turkish wine producers stop using so many sulfites and drop prices to reflect what the quality actually is (comparable to Bulgaria and Georgia), not what they fantasize it to be (France, Spain) and we'll drink it.

Until then, we'll mull it and mock it.

Tony Blair, in responding to worldwide "anti-Americanism" once said: "If you really want to see which countries are preferred, just drive by any embassy in your country and look to see which one has the longest line of people waiting to get in. And that is always the US Embassy". Along those lines, I would ask that next time you find yourself on Turkish airlines and they ask, as they always do, which wine you would prefer, the French or the Turkish, look and see which one all the Turks around you who are partaking chose. Hint: Il n'est pas le vin Turc.

When Turks start drinking Turkish wine and the prices are not indicative of a roadside rape, I might consider. Until then, if I want to slum it, there's always Crimean semi-sweet.

That's a very interesting sociological question, Kpic, and I have often tried to observe the ordering patterns on THY flights. But, after you eliminate non-wine-drinkers and non-Turks from the universe, the observable sample size can be very small.

That said, I would predict the opposite. I think Turks would ask for Turkish wine for the same reason they'd opt for the kofte over the pasta.

This is written by a friend of mine and I'm sharing it and I agree with her.

''First of all I would like to thank for stressing a misconception eventhough you are quite rude.

Before answering you I would like to tell about myself and I’m quite sure it will help answering some of your questions. I started my wine career by studying wine producing technology in 2006. Since then I am involved in wine both professionally and as an amateur wine lover in my private life. My first job was about import wines and it was a very productive and educative period for me but I’m currently working at a Turkish wine company and since I started working here(althought I didn’t miss any chance of ‘turkish wine tastings’) I realized we weren’t being fair to our own wines. I think turkish wine industry is growing rapidly and solidly in the last 5 years. You can easily see that by realizing how many universities are opening educational programs and conscious viticulture and the investments towards wine producing technology. I agree with you for the tax rates being high but just for this reason if you say turkish wines are just suitable for mulled wine, it shows that you have no solid info and you are prejudical. Apart from everything a true wine lover must not be prejudicical as a scientist would be. Because prejudice limits you. However you shouldn’t say no to each kind of food or wine and even the untasteworthy flavours. Only with this kind of improvement you can make a true evaluation. Do you know that Turkish wines are winning many awards in international competitions and currently Turkish wine import is 1.451 tons when the export is 3.768 tons a year.
Eventhough we are a new country in wine and aware that we have a long way to go, we will be much better with conscious and knowledgeable producers.
By the way I would love to buy you a bottle of nice turkish wine :) ''

You might want to reconsider how you're measuring quality. Never have I drunk a glass of wine and said "well this country's wine industry is growing rapidly, so this wine must be good!"

Nor have I ever said, "this country exports more wine than it imports, so this wine must be good!" We all know that relatively few foreign products make it to the Turkish market and certainly none that's cheaper or better than the Turkish equivalent (especially when they are taxed as much as imported liquor). Not to mention that most exported Turkish wine probably goes east, to the Former Soviet Union, where palates are, shall we say, less discriminating that those in perhaps Europe. That said, when your only options are Crimean or Azeri wine, Turkish wine looks very good indeed.

Here's what I have said after drinking Turkish wine:

"This wine is drinkable, but it cost 20 goddam euro." A 20 euro bottle of Italian, Spanish, South African, Australian, New Zealand, Lebanese, American or even Georgian is, typically, a lot better than drinkable.

"I have a headache after two glasses of wine." Perhaps all those education programs can teach Turkish winemakers how to make wine without using sulfites and other poisons.

This is what I would like to say after drinking Turkish wine:

"Hey, this wine is pretty good and it was only 15 TL. That's a good value and something I could serve at a party."

I won't argue -- and fact I said the opposite in the post -- that Turkish wine isn't getting better. I think it is and I have had decent bottles. But, taken as a whole, it's still wildly inconsistent and not a good value -- in short, not ready for prime time. Until then mull and mock.

Also, it's good mixed with 7up and fruit for a nice Sangria.

All that said, I would love you to buy me a nice bottle!

I just loved this blog. Well written. Thanks for taking the time to type it up. Also kudos for your courage to come out and speak up on a topic that is obviously quite touchy.

I am no red wine expert, nor am I in the wine business but I can tell a bad wine when I have one.

Price aside, the taste, the body, the aroma aside... the headache afterwards... How can one get a splitting headache after just one glass? Raki doesn't give me hangover like that. Without fail every time I drink big brandname-A or brandname-B Turkish red wine I get a headache before the meal is over. Never had this experience with other wines except for some of the bad Malbecs.

Can the commenters who are so fond of the local wines please give their recommendations so mere mortals like myself know what to ask for when visiting Turkey?

Let me do my share;
I have never tried the Georgian or Romanian wines people rave about. Have tried Lebanese (Ksara), they are nice. Have tried Moldovan (Purcari).. they are out of this world.

Thanks Buraccio. I agree -- how can you have a headache walking home from the bar in which you've been drinking Turkish wine? Not coincidentally, it's the same as the Efes headache. THAT's another post entirely. Efes is fucking poison.

If Turkish wine partisans would like to suggest some brands to convince us otherwise, I would love to hear about them.

dear carpetblogger, naturally all wine is not equal, in any country. yes, TR wine specturum started from bottom and gradually improving; and it is not going to "happen" in a flash.and generally speaking, TR wine is expensive (for quality) as compared to world wines (its a long discussion "why"; i can explain some of the reasoning if we meet someday) but as the TR wine trade expands, it will get cheaper.
would love to show you what we are doing as a part of "new generation of boutique wineries" of turkey. let me know if you (or anyone else) would be interested.