« Ask Carpetblogger: How Can Ukraine Increase its Appeal to Futbol Hooligans? NSFW, BTW | Main | Things on Which War Should be Declared: Istanbul Edition »

Among our favorite hobbies here at Carpetblog is ranting about Istanbul's lack of ethnic restaurants. After years of listening to easily disputable claims of Istanbul being a diverse, cosmopolitan city (we've got all kinds of Anatolian emigrants!), we are pleased report that two outstanding establishments form the backbone of the very, very slim body of non-Turkish food here. 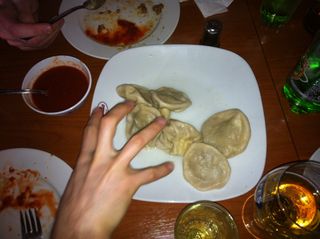 Both are well off the traditional Lebanese/Indian/Mexican/Pakistani/Thai/Chinese axis* taken for granted in any North American or European city with a population of more than 100,000. Istanbul still has none in that category that can serve a passibly authentic meal at a reasonable price (or at any price, really).

NEWS FLASH: CAFE EURO IS CLOSED NOW! :(   The first is Cafe Euro, a bus station Georgian hole-in-the-wall in Aksaray which has already been praised on these pages and others and most recently, here.  That this place has been around for six years and we only discovered it last summer is one of our biggest failings as an expat. The excellence of its khingali as well as the authenticity of its post-Soviet atmosphere have since been verified by multiple Bakuvitsi. Ingredients are delivered from Kutaisi weekly, but unlike other writers, we're not going to blabber away about what day that happens. You should go on Saturday. 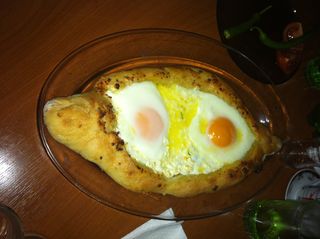 They've got homemade chacha, and, if the planets are aligned, tarkhun (don't let them talk you into trying that other florescent green liquid instead -- it's vile). The other big failing of the Eurasia review is that the reporter failed to inquire about deliveries of the forbidden meat. He has since been sent to a re-education camp.

The menu is neither extensive nor available in written form and it helps a lot if you speak Russian (or Georgian), but this is the real thing. It's cheap, cheap too; we have been told you can sit there all afternoon drinking and eating for about 30TL. Go there, preferably with someone who knows Georgian food and how to wield a knife. You'll make new friends who will share village wine from a jug and you'll leave smelling like a post-Soviet bus station. The owner's money quote from the Eurasianet review: "not all my customers are like you.”

Cafe Euro is at the entrance of a giant bus station in Aksaray. You didn't know there was one? Well, there is. It's called Emniyet Garaji and it's on Küçuk Langa Cad. Google it. You can walk there from the Aksaray or Yusufpaşa tram stops.

The second winner is Gaya Korean restaurant. It, too, has been around for awhile but has recently experienced an inexplicable surge in popularity among Carpetblogger's contemporaries. Indeed, of the only two really delicious meals we have eaten lately that were not served in a bus station, both were at Gaya.

Of all major Asian cuisines, we're least familiar with Korean so we don't really know the names of things. But, based on the noodles that look like glassy eels and the fuzzy spicy pickled leaves, we're going to guess the ingredients are imported from the motherland and prepared with love by a Korean mother for her only son. Most importantly, there's pork, cooked right there on the table in front of you (Is this the only non-pizza restaurant in Istanbul where you can order the forbidden meat? Discuss). We will go back there often, specifically to eat the spicy tofu.

Most of the other diners in its rather sterile and empty space are either Korean businessmen or post-Soviet prostitutes, which we view as vote of confidence. It's not particularly cheap (60-70TL for a giant set meal, including pork and maybe an Efes or two) but it's more than you can eat and it's delicious. The service is friendly but not exactly attentive. Don't be in a hurry.

Gaya is near Taksim, on Abdulhak Hamit Caddesi, No. 50, in the Green Park Hotel.

*Please, spare yourself the indignity of arguing there is a credible example of any of these cuisines in Istanbul. We know them all.

Gaya seems like a great place, but 60-70 lira is pretty darn steep. I usually go to Wagamama in Kanyon when I want a quality asian meal. I know it's a franchise and all, but the food is great.

So i started my own german döner blog.