Ask Carpetblogger: Is There a Decent Indian Joint in Istanbul?

There is no horse so dead it cannot be beaten a bit harder, but you might have heard that it's hard to get authentic non-Turkish food in Istanbul. There are many reasons, we theorize, for this, ranging from Turks' unadventurous palates and propensity against emigration, to the city's lack of immigrants and foreign laborers.

But here's a quiz: In what neighborhood are you most likely to find edible Indian, Japanese, Arabic and Korean (reputedly Chinese too, but that's unverified)?

Surprisingly, "none of them" is not the correct answer. Nor is foreigner-friendly Cihangir (an international restaurant in Cihangir is almost certainly guaranteed to be awful and/or stupid expensive).  Sultanahmet is a wasteland and should be avoided by people who eat. Aksaray could be reliable, if you want food produced by different kinds of Turks (Uighur, Uzbek etc), which you may (though the best reason to go to Aksaray, the Georgian Cafe Euro, recently closed. Super sad face)

The answer: concrete, sterile Talimhane, an area of undistinguished mid-priced boxy hotels favored by tour groups and business travellers, just off Taksim Square. Actually, it makes a great deal of sense, if you think about it.

Abandon the idea that people outside North America or Europe or UK crave diversity in their diet. Most folks prefer their köfte, vindaloo, mapu dofu and taboulleh when they travel, just like they have at home every damn day (certainly true for some North American/European/UK demographics as well). Sure, visitors will give köfte and kebab a whirl, but they prefer the familiar. Restaurants in Talimhane know this, and accordingly, several are serving authentic meals to groups of tourists, visiting business travellers and tiny expat communities. Turks aren't the primary market for non-Turkish food, so placing your restaurant in touristy Talimhane where no one actually lives isn't going hurt you that much.

We have always theorized this was true, and Imran, the charming owner of Musafir Indian restaurant in Talimhane confirmed it when we visited the other night with our grubby companions. An Indian (Pakistani?) from Manchester, Imran also confirmed another theory of ours: if you want to make the real thing, you have to import the right ingredients, probably in your suitcase. From one suitcase importer to another: respect.

Musafir serves delicious Indian meals -- all the usual dishes --at reasonable prices with friendly service, thus checking all key boxes. Most of the diners were Indians -- tourists, mostly, but some businesspeople and expats -- which we found encouraging. That a restaurant appeals to national tastes, rather than Turkish, bodes well. He asked our advice on the wine list, which we enthusiastically gave. We asked him why we never knew his place was so good (it's been there for ten years) and why he's not on Yemek Sepeti, the thing that works best in Turkey. He's working on both. Musafir receives the coveted Carpetblog stamp of approval, which should help him out a lot.

Musafir is a few blocks from Gaya Korean, which we have praised for its fresh and authentic ingredients (and pork!). There's also a Japanese restaurant nearby, of which one grubby companion approves, a Chinese place (which has gone unreviewed by our contemporaries as far as we know) and the cheap and cheerful Falafel House, which serves by far the best falafel in the city and is a longtime Carpetblog favorite.

It's unlikely that you're going to get "the best Indian/Korean/Japanese meal ever" at these joints. You will, however, get a no-nonsense* meal designed to please visitors and expats with lowered expectations.

*Speaking of nonsense, we visited the trendy new Indochine (rumored to be Vietnamese) on Kumbaraci, relatively early on Saturday night, only to be told that the empty restaurant could neither seat three people without a reservation nor allow them to eat in the bar. That's exactly the sort of nonsense we expect from Istanbul's trendy restaurants and why eating out here so frequently irks. Our expectations for getting a good Vietnamese meal there are even lower than they were when we entered, which is hard to imagine.

Things on Which War Should be Declared: Istanbul Edition

If you follow the US news, you might be aware that war has been declared on women, contraception and, in general, common sense. If you are in Istanbul, you might know that, in addition to the usual things, war has been declared on bazaar traders who shout too much (though, as The Turkish Life correctly points out, the most casual observer can tell that's more of an urban myth than a thing that is actually happening).

Are loud bazaarcıs Istanbul's biggest offense? They aren't even really the biggest offense in bazaars, in our opinion. But, since war declaring seems to be a trend and we don't want to be left behind, there are a number of other things in Istanbul on which we suggest War Be Declared.

Street Cats: Shut up, catlovers -- here's a disgusting story that justifies our long-held position that Istanbul's street cat population is out of control. Dining in a pleasant garden in Cihangir yesterday, a nasty cat on top of a wall backs its hairy cat anus up and sprays all the tables below -- one of which we had been recently sitting at with our charming and well-dressed companions. As if the pervasive odor of cat piss in every building entryway wasn't enough, now it comes in your coffee*.

If you can't get on board with a conventional war on street cats, perhaps you can support our more moderate position in favor of population control via the introduction of natural predators. (BTW, we made that GIF ourselves, a medium which is probably going to be our primary creative outlet from now on. From CVs, to emails, to illustrating petty gossip, there really isn't a message that can't be enhanced with a GIF).

*To the waiter's credit, he did remove the wet sugar packets and salt and pepper shakers and cursorily wipe the table off after we pointed it out to him. The food service sector in Istanbul remains beyond reproach.

Scooter-borne delivery drivers: As the city's traffic becomes more intractable and more Istanbullus get money, the population of scooter drivers -- mostly young men who would be equally treacherous drivers in cars -- has exploded. It's no longer a matter of looking both ways before crossing a one-way street, it's a matter of looking both ways before stepping onto a sidewalk, or a pedestrian zone or out your front door, lest you become part of Bambi's paket servis.

Fortunately, there may be some overlap in the interests of scooter driver and street cat natural predators. Another cackle of hyenas, please!

Neighbors who Burn Coal and Pieces of Laminate in May: We know gaz is expensive. We know the draft can be lethal. But Istanbul's trademark smell of burning coal and cat piss should be confined to winter. If it gets below 60 degrees in May, instead of stuffing the soba with pieces of old furniture you found in the street, put on a goddam sweater. Your black-smoke belching chimney is directly below our balcony and you might be troubled to learn how many common (and uncommon) household items could, with good aim, be lodged in it.

The War on Outside Seating in Beyoğlu: This is a war on which war needs to be declared. COME ON! It's been a year, summer's here and sitting inside when it's 1000 degrees out is unacceptable. What kind of city bans --rather than just regulates -- outdoor seating? Rumors are flying that some outdoor seating is returning (creeping tablism has been growing on Galata Meydan for a couple months now), at a greater cost to restaurant owners, which will surely have no impact at all on already-inflated eating and drinking prices. But as of yesterday, Urban Sokak was as sad and silent as it has been for the last year. 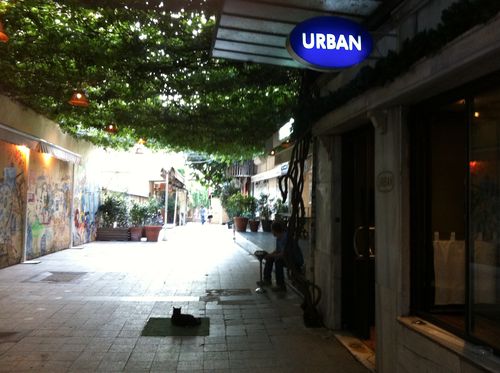 Maybe what Urban Sokak really needs is some hyenas.

Higher Prices for Foreigners at Orhan Pamuk's Museum of Innocence. Seriously, what kind of museum in a developed country gets away with charging foreigners more for tickets? We like Orhan Pamuk, enjoyed the book and have heard great things about the museum. But 25TL tickets for foreigners, compared to 15TL for Turks, is fucking backwards.  If we were Orhan Pamuk, we'd extract a pound of flesh from the people who wanted to throw us in jail for "insulting Turkishness," rather the people who said, "uh, y'alls ever heard of free speech?"  It costs as much for foreigners to enter the MOI as it does to visit the Hagia Sofia. The only other museum we've come across that has this pricing structure is Miniaturk. Miniaturk is cheaper, too, and has scale mini-models of OPET stations and Ataturk airport. 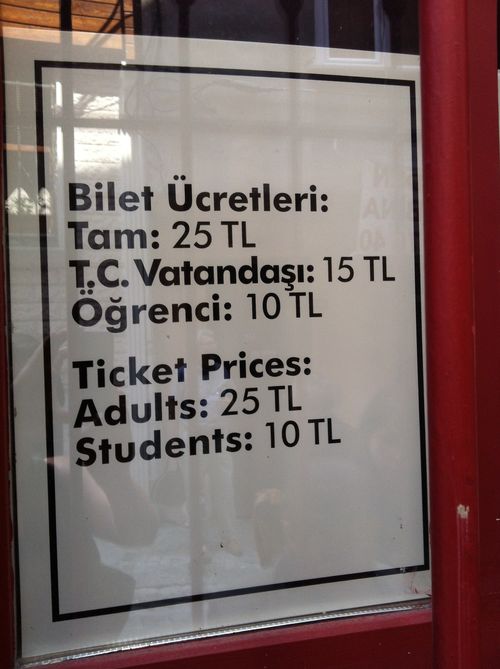 Would pay extra at MOI if there were hyenas.