In the event that an Istanbul expat doesn't want to go out to eat Turkish food -- something that is extremely unlikely because everyone agrees strongly that Turkish food is one of the world's top cuisines and there's no reason to try something different -- options are shockingly limited for a city of this size. We have theories about why this is, ranging from the conservative Turkish palate to a dearth of non-Anatolian immigrants, but several recent developments have given us hope that options for quality, creative, international dining and drinking here are increasing.

First, we will broker no counter-argument to the assertion that Efes is poison and is the worst beer ever.  Back in the day, we used to like beer a great deal and drank it frequently, particularly the Pacific Northwest microbrew variety which was conveniently available at multiple locations near our front door. Since moving to Istanbul, we have stopped drinking beer in protest at the awfulness of Efes and had forgotten how nice a good beer can be.

Barriers to doing something different and well here are notoriously high. So when we heard about the opening of the Bosphorus Brewing Company, we were cautiously optimistic, but also a bit skeptical. Other brewpubs have come and gone and no one missed them because they were expensive and not very good. But we're willing to try new things, even if doing so requires leaving Beyoğlu, physically dragging our companion out the door and 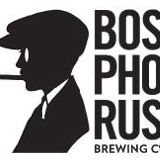 BBC receives the highly-sought after, unqualified Carpetblog Stamp of Approval. Other people can comment on the authenticity of its brewed on-site English ales or the legitimacy of its gastropub atmosphere, but we liked everything about it. They have five beers on tap right now (but have the capacity for 10) and we tried them all. We ate almost the entire bar menu (memo to self: next time don't offer to buy). Nothing was wanting. Early rumors suggested it was expensive but it was no more per person than a mediocre mezze night in Beyoğlu-- the primary difference being ample, DELICIOUS BEER. And anyway, if you want cheap beer, go to Istiklal and drink Efes.

Phillip and Jill, the friendly British proprietors promised all kinds of appealing innovations -- like frequent drinker cards, tastings, growlers and kegs (pause, for a moment, to imagine how a keg of Hops and Glory positioned on the balkon next summer will improve your outlook on life). Our companion quibbled about stupid shit that does not even bear repeating, but we have no complaints other than the fact we can't walk there. We hope it becomes the friendly expat hangout that doesn't really exist here. Go support them tonight.

Second development: Culinarist is the project of a Dutch and Turk foodie team and is hosting regular "open table" dinners at a space in Cihangir. In the interest of full disclosure, we haven't actually gone to an open table dinner yet, but we plan to and not knowing anything about something has never before stopped us from offering an opinion about it. The menus offer creative international dishes with a "Turkish twist." Their Thanksgiving menu this weekend includes crostini with smoked mackarel in a dressing of homemade mayonaise, apple and chives and ravioli filled with spinach and Turkish ricotta in butter-sage sauce, all of which sound like things we would consume with enthusiasm.

We have, however, participated in a Culinarist Turkish wine tasting evening which was delightful. It was enjoyable not because the wine was good (it was, after all, Turkish wine), but because Jotham is knowledgeable and we had an interesting discussion about why Turkish wine isn't very good and why it tastes the way it does (there are good reasons, it turns out). It was also a useful primer for folks new to wine tasting. So, go to those events and support local efforts to do something different well.

Third! Wine tasting at the Four Seasons Sultanahmet on Friday nights. This is the best deal in town. For 45 TL you get to try four flights of not necessarily Turkish wines (we tried Italian wines one night, Turkish another night -- some of which were good -- and a different night they offered sparkling wines). They also put out an impressive cheese spread -- mostly good-quality Turkish varieties and a few imports. We don't typically think first of the Four Seasons when seeking a Friday night wine drinking bargain, but this is a good deal. 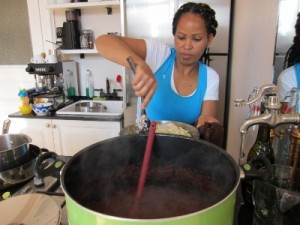 Fourth! Istanbul Eats and IOM sponsored Migrant Kitchen last week for which Liberian, Cameroonian and Ethiopian cooks living in Istanbul prepared and served a typical lunch. Although we missed two of the three lunches, the Ethiopian chef, in particular, received rave reviews. Sadly, this was a temporary exhibition but we hope it encourages immigrant chefs to establish more formal operations to serve both their homesick compatriots and expats tired of kofte. Istanbul's growing community of Africans, while transient and not well-off, might be the best hope for the development of a more international dining scene in this giant overwhelmingly Turkish city. As always, count on Istanbul Eats to keep you up to speed on developments in this area.

Excellent post! As you know we went to BBC as well, but I didn't know about the growlers yet. That would be great! When we lived in Baltimore, we had a ton of local microbreweries and particularly loved Dogfish Head IPAs. Now, I can have my IPA and still live in Istanbul too. ;-)

The availability of kegs and growlers heralds a seismic shift in party-having!