We have been closely following the controversies in which Turkish Airlines has embroiled itself recently: that its proposed new uniforms are ugly, and that it may or may not stop alcohol service on a few domestic/some/all flights everywhere all the time.

This may shock some of you, but here it is. We don't give two shits about what THY flight attendants wear nor what they serve.

When we get on a THY plane, we have several expectations:

Those are the non-negotiables.

THY, admittedly, has a mixed record on some of those criteria*. As far as we know, no plane has fallen out of the sky. But the debate in Turkey about how well THY pilots can, or more accurately, cannot, communicate in the lingua franca of international air traffic has been, shall we say, muted (and, sadly, mostly in Danish). The wrong airport landing pilot is a favorite story here at Carpetblog. And, could they park planes farther away from the terminal and not demand passengers get a Bulgarian visa stamp? We doubt it. 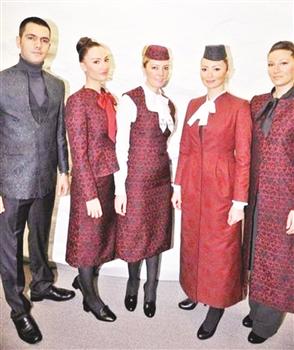 Sure, we'll be annoyed if we get on a flight from Erzurum and can't have a plastic cup of Doluca, because no one deserves a cup of warm Turkish wine more than someone who's been in Erzurum. But, we'll probably get over it, because it's a 90 MINUTE FLIGHT and there's plenty of easily-obtainable Doluca in Istanbul. (We'll revisit this policy if THY switches the wine selection on European flights from "French or Turkish?" to "Doluca or Yakut?" That justifies an uprising).

But, this is the really important thing. When an airport transfer bus approaches a line of north African airlines, with six or seven planes from airlines you've never heard of waiting in a row, and yours is the one in the middle with the red tail, delightfully named "Afyonhisar," and not the one with the airline name written in handpainted Arabic (or Cyrillic) with a staircase leading into the tail section, you say to yourself -- or maybe out loud  -- "Looking good, THY!" Then, you board, and you have a glass of Doluca and everything is fine.

If we might offer some branding alternatives to "Globally Yours," may we suggest "Yours When all Other Options are Unspeakably Awful."