It Takes a Village to Install a Klima

It's OK if you have concluded, based on this blog, that I am obsessed with AC (I like the Turkish word, klima, better, BTW). I am. My new house has western exposure and a west-facing skylight, so it becomes an oven in the afternoon. The only reason I went to Turkish class was to sit under the klima for four hours a day*. You have no idea how cranky the carpetdogs get in this heat. They go sulk on the ground floor every afternoon, resentful and bitter.

After last week's heatwave I decided all the logistical, linguistic and financial issues associated with a klima purchase were subordinate to my personal comfort. Since I value transactions that minimize discussion and debate, I went to Koc Tas, the Turkish Home Depot. I already knew which brand and BTU of klima I wanted, so all I had to do was point and pay. The installers (the montaj) would call Monday, I was told. I felt smug and competent.

Even though I sat around all Monday waiting (with my busy schedule, you have no idea what a sacrifice that was), but no montaj. Tuesday, they called while I was out (and since "in two hours" and "at two o'clock" sound a lot alike in Turkish, I ran home needlessly quickly). I was so excited.

I became less excited when I saw that the four montaj dudes didn't have a ladder, which would make it pretty much impossible for them to put the klima in a place that made any sense, or install the motor on the outside of the house. They suggested putting it over the kitchen window in a way that would prevent the window from ever opening again. I told them to take their klima and, uh, return it from whence it came.

Koc Tas willingly refunded my money, but the cool weather and rain that made me think that that I didn't really need a klima after all was replaced by 90 degree heat. My problem persisted.

As I lay sweating and sulking on my couch, I noticed the apartment across the alley was getting a new klima installed. I seethed with jealousy. But as I watched the klima monkeys work, two things occurred to me: first, klima montaj is not fucking rocket science, and two, if they could do it there why couldn't they do it in my house? I figured that any klima monkey who could stand on the motor brackets three stories above the street while drilling holes in the side of the apartment had the kind of moxie needed to montaj my klima.

I'm sure those klima monkeys thought they'd hit the jackpot when yabanci (foreigner) lady invited them over for a klima consultation! They assured me that they could install my klima, climbing up on the roof if necessary, and that all I needed to do was walk down to the neighborhood Arcelik (a Turkish brand of appliances) shop and buy one. This I could do.

I am very well known in my neighborhood. Kemal, the dude who runs the local parking garage, and I have a chatty relationship and, as I walked by on my way to the Arcelik shop, he asked me how my new klima was working out. I told him my tale of woe (I'm certain he was a bit fuzzy on the details after my "explanation"). Nodding as if it all made complete sense, he said could not allow me to go to the shop by myself because they would give me the yabanci price, and by going with me, he would ensure that I got the komsu (neighbor) price. He left his garage in the able care of the old blind and deaf dude who sits in front of the hamam all day and we walked to the shop.

Since the guys who own the shop see me walk by every single day with the carpetdogs, and the klima monkeys had already told them that I would be coming by, Kemal's assistance was superfluous. I got the komsu price and, over tea and polite conversation about the status of the carpetdogs, got assurances that the klima monkeys would montaj my klima on Saturday. I tried to explain that the montaj might be difficult, but the sales guy would have none of it. "My friends told me all about it. No problem." 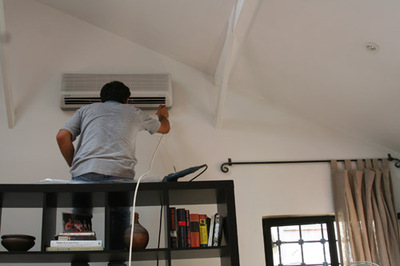 They came on Saturday. Instead of letting the lack of ladder stop them, the klima monkeys used my bookshelf to install the klima and scaled the walls carrying the motor to get to the roof.

So there's a lesson to be learned here. It may be psychologically easier to go to the Koc Tas and buy your klima, but if you want to get the job done, it's more effective just to use your damn Turkish and buy locally, where they know you.

*Since not one word of English was used in any of these transactions, a case could be made that had I used my Turkish classes as an opportunity to learn Turkish, rather than a source of klima-ized comfort, the whole process would have been substantially less painful.

So, we were learning the grammar for "because of/as a result of/that's why." It's really important to understand the grammar because the word order might not tell you what you need to know about the meaning of a sentence.

Here was the example used:

I ate ice cream. I have a sore throat.

Now, where I come from, cold is a noted treatment for painful swelling. I'm no doctor, but I think this is because it reduces blood flow to the inflamed area. When kids get their tonsils out, they get ice cream, right?

So I constructed the following sentence:

Because I have a sore throat, I ate ice cream.

Imagine my confusion when the teacher tried to explain to me that there's no way the grammar I used could be correct when the idea I was expressing was patently false. Not only did I commit grammatical crimes, I also violated basic Turkish medical principles. Everyone knows eating cold things -- ice cream, cold water, ice -- can make you sick. The correct sentence:

Because I ate ice cream, I have a sore throat.

No amount of cultural assimilation will ever close the gap between our peoples on the uses and abuses of cold.