Ask Carpetblogger: How Can Ukraine Increase its Appeal to Futbol Hooligans? NSFW, BTW

The Eurocup 2012 soccer tournament in Ukraine this year is finding that they have sold only half the tickets they should have by now. European soccer hooligan wannabes are blanching at the 500 Euro per night for three star crapotels. My question for you...don't Ukrainians realize that if they don't charge reasonable prices, nobody will come?

Thanks for the question! We know that you, like us, care about both Ukraine and futbol so we're going to answer this question with more than the usual care and seriousness.

As you probably know, Carpetblogger devoted much of her youth to selling things no one wants, namely, Democrats. Therefore, we are uniquely positioned to help Ukraine address its issues.

Ukraine's government is run by a breathtakingly corrupt cabal of thugs, its economy is near collapse and its sullenly incompetent service sector is woefully unprepared to meet the high standards in cuisine and accommodation demanded by sophisticated world futbol fans. These negatives are hard to overcome, it's true. But Ukraine is not without natural advantages. As a market research professional, we encourage Ukraine to play to its strengths.

It's completely understandable if you confuse Carpetblog with ESPN, what with all this coverage of manly sports lately. Last week it was football. This week, Olive Oil wrestling!

For 647 years, the Kırkpınar Oil Wrestling Festival and tournament (Yağlı Güreş) has been held in a field next to a river in Kırkpınar, just outside of Edirne. Apparently, it is the oldest continuously running, sanctioned sporting competition in the world. It has a long and interesting history. Read about it elsewhere.

Edirne is a hot provincial town near the Bulgarian border that once served as an Ottoman capital. It's about a two hour drive from Istanbul (but more like three and a half at 11 pm on a Sunday night). Astute readers will remember that the Chiplomat and Carpetblogger visited Edirne already, but the trip was overshadowed by the journey to Bulgaristan and didn't get much coverage. 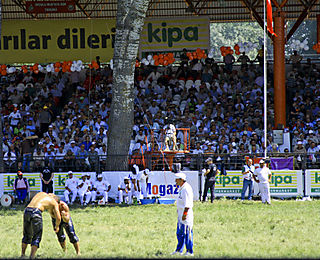 Like most sporting events in Turkey, this one had plenty of nationalist chest beating, official bluster and flag waving (not that we had to even leave Istanbul for that sort of nonsense). Also like most Turkish group events, it was 100% devoid of intentional irony.

The main show consisted multiple wrestling tournaments between guys wearing pants made of water buffalo leather (called kispet) and drenched in olive oil. A tournament can be won in a smackdown if one wrestler sticks his entire arm in and out of his opponent's kispet. The overall winner of the four-day tournament is named the "baş pehlıvan" or big hero and gets a lot of cash and valuable prizes. (Dying to know more? Read this)

Before going any farther, we have to address the whispers that frequently accompany discussions of the Kırkpınar Oil Wrestling festival. Turks will deny -- strenuously -- that, after watching large men drenched in olive oil, rolling around on the ground in a concerted effort to shove their hands down each others' leather pants, anyone could possibly perceive a wee bit of homoeroticism. In fact, I had heard there was local outcry a few years ago that the tradition-bound festival had taken a place on the international gay travel circuit.

The Carpetblog assessment: not bloody likely.

The Kırkpınar Oil Wrestling Festival doesn't appear on the internation 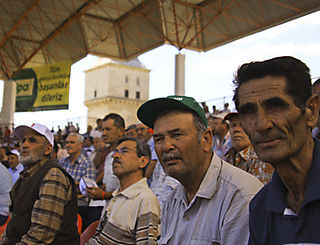 al gay travel circuit for the same reason the Enumclaw Fair, with its logger rodeo, doesn't: the optics aren't right. Like all events for which you drive up and park in a dusty field, this one had carnies, dirty gypsies and booths selling water purifiers and carpet stain removers. There was a rusty Soviet-style ferris wheel, guys in the local equivalent of John Deere caps and sweaty prepubescent kids amped up on sugar and hormones. Overall, it was a very, uh, provincial crowd. As far as we could tell, we were the only foreigners around and not one of us had ever been on the gay travel circuit. We were also among the .001% of the wrestling spectators who were female.

By virtue of having read one more website about olive oil wrestling than the rest of us, the Producer became the resident wrestling Usta (master). He explained the finer points of the sport, such as a pin is achieved when one dude's belly button is turned to the sky or he gets carried for five steps. The guys who carry the olive oil around are called "yağcılar" (lit: guys who carry olive oil). No one knew, however, if they use the regular kind of olive oil you can get at the Carrefour or if it's special extra virgin press that mixes particularly well with sweat and grass. The green cans carried around by the yağcılar suggest it's the former.

In one of the worst disinformation campaigns in recent memory, we had been told that SESAME SEEDS were thrown at the losing wrestler. It turns out that this is absolutely not the case. It's a good thing we realized this before we unloaded our bags on a burly, greasy and hig 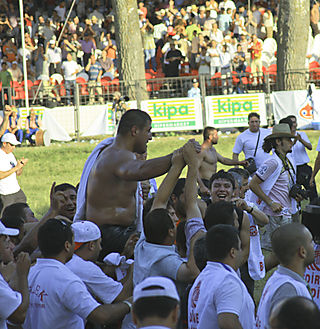 Speaking of losers, the tournament included matches between little kids and between teenagers. The slimy little eels moved faster than the big dudes, so the matches were a lot more interesting to watch. However, we were quite surprised when the losing kids flopped on the grass and bawled their heads off. Sack up little Turks, or else the yabancıs will pelt you with sesame seeds!

We've heard the arguments in favor of football and none are very compelling. Some have compared football to religion, which, while accurate, does nothing to enhance our appreciation for it. Lots of things are wildly popular while at the same time being screamingly boring.

Under intense pressure, and having not one better option on a Wednesday night, we succumbed and went to a bar, and not just to do what we normally do at bars. We went with the specific intent of watching Turkey play Germany in the 2008 Euro cup. If you want to understand how Turkey got there and what the achievement represents, there are plenty of other blogs that can explain it for you.


Because Americans view soccer/football as a game played by no one older than age 11, this is something of a watershed. Not that we've never watched a soccer game before -- alert readers will remember our monumental photographic achievements following in some aspect of the 2006 World Cup which involved Ukraine. We watched at least seven minutes of that game and joined the crowd celebrating on Maidan afterwards. We kept our shirt on, however. 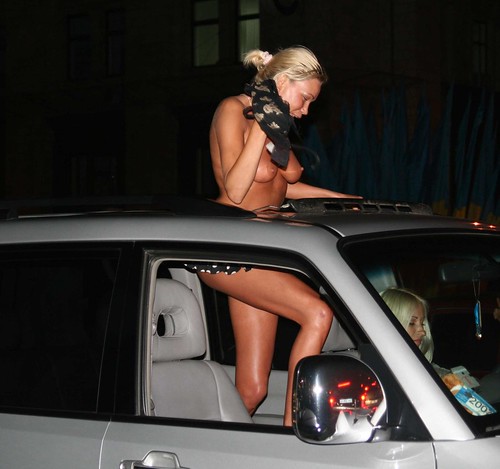 It's true that there weren't as many boobies on display afterwards this time, and not just because the Turks lost. Unlike Ukies, Turkish women rarely take their clothes off in public.

We're not sure we can accurately characterize nature of the Turkey/Germany rivalry for Americans. It's sort of as if America played Mexico in some sport that we can't think of, with all the racism and divided loyalties it would inspire. As happens in a lot of countries, football exacerbates a particularly virulent strain of testosterone-driven nationalism here that needs little encouragement, even on ordinary days. People --particularly those with penises -- were pretty much out of their heads. Walking down Istiklal was like entering Magandalarstan!

The bar scene was grim. There were a lot of people actually watching the game, which we did not anticipate. No one wanted to chat. And they all devoted a lot of energy getting very excited about things that almost happened during the game, which is apparently very common when people watch football matches.

Don't misinterpret. We totally were rooting for the Turks. Anytime Turks want to wreak havoc in Vienna, Carpetblog is behind them. But really, our primary motivation for watching was seeing Turkey win, and hoping Russia would win, so they would play each other and we could root against Russia.